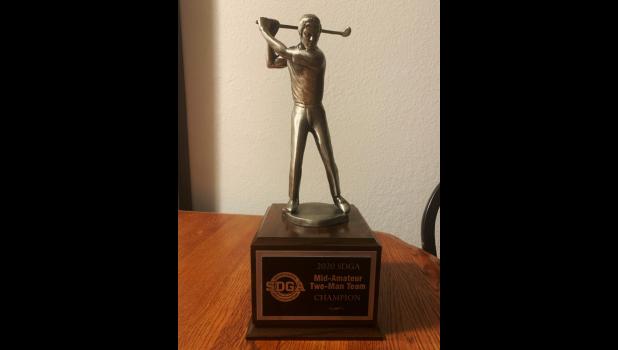 The South Dakota Golf Association (SDGA) held their two-day 2020 SDGA Mid-Amateur Two-Man Championship on Saturday, September 19th and Sunday, September 20th in Rapid City. Saturday’s round was held at the Golf Club at Red Rock and Sunday’s round was held at the Hart Ranch Golf Course. Philip locals who attended the weekend-long event were Luke Weber and Brad Haynes, as well as Brit Miller and Dak Carley. Weber and Haynes won the championship, with a day one score of 74 and a day two score of 65.
After playing at both courses, both team members said they favor Hart Ranch over the Red Rock. “The [Hart Ranch] course was set up for the players to score well on and this is the course Brad and I played a lot together back in high school when we were competing,” said Weber. “We know the course way better and plus shooting better on it helps. Red Rock was set up for the PGA Tour players and not players from this area,” he added. “I definitely prefer playing Hart Ranch over Red Rock. I grew up playing Hart Ranch in high school and have great memories playing there,” said Haynes. “The course is very player friendly yet very difficult. It’s right in front of you, so if you’re playing well, you can score well,” he added.
The first day of golf was played at the Golf Club at Red Rock and featured a best ball playing format. Best ball format is when both players play their own ball on each hole and at the end of each hole, the lowest score is used. “So if Brad got a 4 and I got a 5, we would use Brad’s score that hole,” Weber added. Both players said they enjoyed the best ball format. Weber said he likes that if one player has a bad hole, their partner can pick them up and the team can use their score. “The first few holes Brad had to carry me! So, that was nice,” he said. “I liked the best ball/4-ball format. This format allowed us to utilize each others hot streaks,” said Haynes, adding that at different times in the round, one of them was struggling and the other seemed to come through when they needed it. “I was happy with our day one score,” said Haynes. “After day one, I thought we ham and egged it well,” said Weber. The two-man team ended up closing out day one with a 2-over 74. “Luke and I both knew it could have been better,” said Haynes. “But it could have been a lot worse too.” Both said they knew they were sitting middle of the pack in their flight. “Honestly I wasn’t even thinking about the overall. I came into the weekend just wanting to be competitive in our flight. After day one we were competitive, so I was very pleased with our position,” said Haynes, with Weber echoing his comments. “As far as our thoughts on placing, we thought we might have a chance in our flight but not the overall because we were down 8 shots overall,” he said.
The second day, the team played at Hart Ranch, where the playing format was a Modified Chapman. This format means that both players tee off and then each player would hit the others ball. The team would then choose the best one and alternate shots until the ball goes in the hole.“I love Chapman! It's a fun format that allows each of us to play a ball from different distances than we normally would,” said Weber. “I do like the Chapman format. Probably not as much as I like the four ball format, but I may have to change my thinking now,” said Haynes. Weber said that day two was better because they both played more consistently  throughout the round. “We never put each other in bad spots,” he said. Weber noted that the pins were in more reachable places at Hart Ranch compared to where they were at Red Rock. “The greens at Red Rock were definitely the fastest I have ever played on so, when we got to Hart Ranch on their practice green, we knew we could at least putt better because they weren't lightning fast,” said Weber.
Haynes said that day two was the greatest round of golf he has ever been a part of and a round of golf he will never forget. “The Chapman format is a very tough format, especially if one of you is struggling,” he said. After shooting 6-under on the front nine, which included two eagles (two under par) and two birdies (one under par), Haynes says he knew then that they had something very special brewing. “We finished the day shooting a 7-under par 65 that included three eagles. It was a very special day of golf for me,” he said proudly.