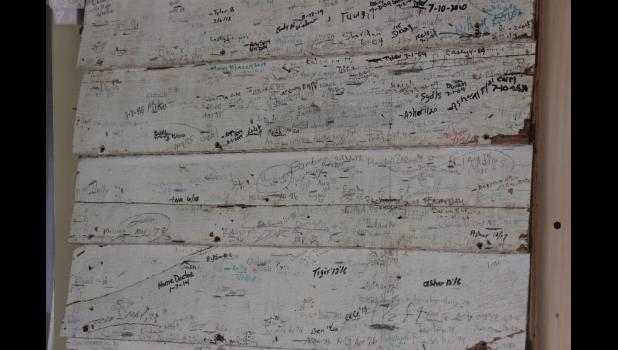 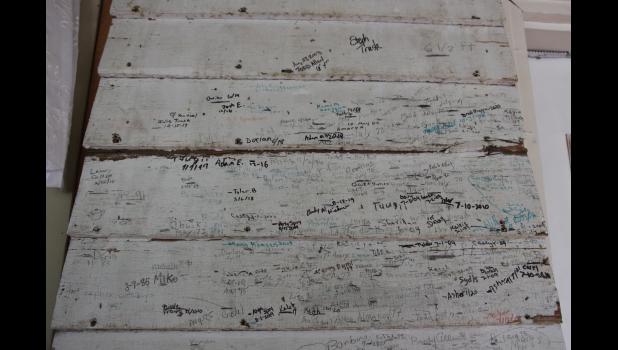 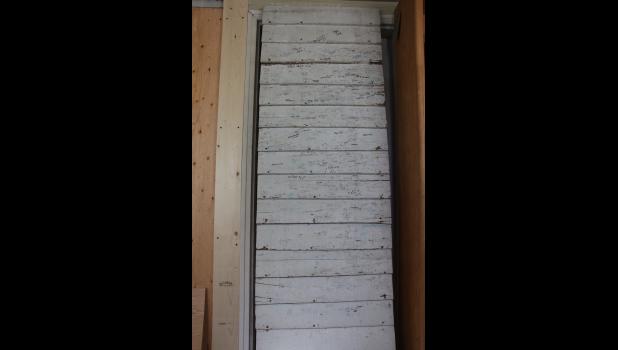 By:
M. R. Hansen
Many old homes have a wall, or at least a vertical area, where the heights of their many of their children were measured year by year.  This photo is a wall of the Dobby and Vivian Hansen home with names and heights recorded for 65 years or so.  First a little background.
In 1955 or so Dobby and Vivian had to move a quarter mile north to make room for the new alignment of Highway 14.  Previously, Highway 14 went through downtown as it did for all of the jerk-water towns along Bad River.  As you know, a jerk-water town is where the train stopped to take on water, every 10 miles or so, as it went from Ft. Pierre to Deadwood.  After 50 years, or so of growth, the Highway was straightened to make it safer and shorter.  How many of you remember that?
Dobby went north to buy the Historic O’Connell house from Jim or Danny O’Connell and hired the legendary Ervin O’Neill to move it in 35 miles cross country and plant it where it is now.  We are moving out of this house now and hired Tom Swift to cut out this section of the wall to preserve it.  Don Ravellette graciously agreed to photograph it for us.
All of Dobby and Vivian’s kids are prominently recorded with Frank and Fuddy showing up at the very top.  Wives and spouses of this first generation, such as Barbara Hansen, are also recorded.
Second generation are also recorded such as Todd and Gwen, kids of Carol; Blaise, Holly, Clay, and Tiffany, kids of M. R. and Barbara Hansen, Sheridan and Emily Hansen, kids of Fuddy; Steph and Darci, kids of Frank, etc.
Third generation kids are recorded, toward the bottom.  Melissa, Kelsey, Sarah, and Tyler Butcher are recorded numerous times since they lived not far away and came to visit Grandma Hansen many times.  In fact, Gwen, Sarah, and Tyler are moving back to Philip before too long.  Willow, daughter of Blaise, shows up prominently.  Asher Maudsley, son of Holly, shows up several times.  Tiger and Cece, kids of Sheridan are displayed clearly.
Kids of neighbors who grew up in Hansen Court are also recorded.  On Halloween Vivian would measure the kids who came to visit, then give them a book; no candy.
Friends are also recorded, such as Stephanie and Julie Trask, Arly Spry, Kerry Burns, etc.
Clay worked many hours to renovate this house before we moved in and had the foresight to leave this area exposed so we could add names the last 7 years.  Now that we are moving we wanted to preserve this area for posterity and, since Clay is paying the bill and put dibs on the area, he can have it.