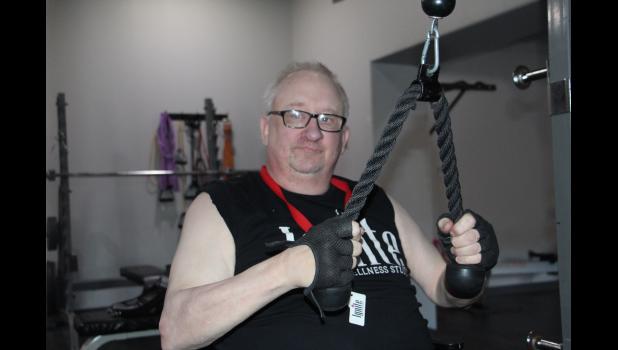 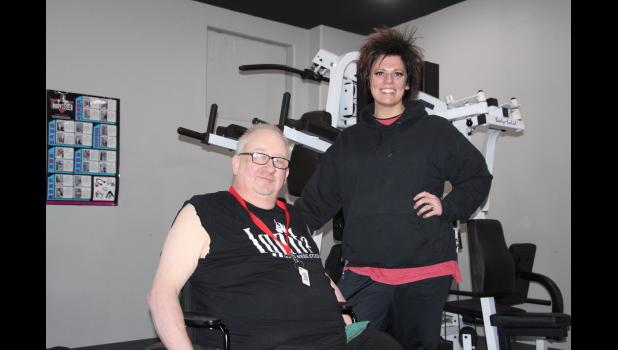 Van Royen with Ignite Studio since the grand opening in 2017

A long time customer of Ignite Studios, downtown Philip, is moving this Saturday to a new apartment in Pierre, SD. Duane VanRoyen, an amputee that has lived for many years in the Senechal Apartments has been a dedicated customer of Ignite since their very beginning. It was early in 2017 when I would go to the post office every day and watch the progress of the Ignite Studio,” said VanRoyan. “I was there for their grand opening in the spring of 2017, and have been coming three days a week to lift weights and exercise using machines and free weights.”
Duane graduated from Philip High School in 1981, and has worked various jobs in Pierre, Wall, and Kadoka. He found out the news, that his toe had to be taken off because of infection due to Type 2 Diabetes in 2013. “I didn’t pay attention to my symptoms, and drank a lot of pop,” said Duane VanRoyan. “I would down two Mt. Dew or Cokes at a time, and ate lots of sweets. I would eat those honeybuns for meals, I just didn’t get it until it was to late. I would just think my feet hurt because I was on them all the time,” shared VanRoyen. “I wish I would have been introduced to a place like this earlier and kept better care of myself at a younger age,” said VanRoyen.
VanRoyen has had a total of five amputations. He has lost both legs, one just above the knee and one just below the knee. “Those were not a picnic,” said VanRoyen, “the last one, was in 2020.” He is on insulin daily and has a check up every three months.
“Although severe health issues have left him using a wheelchair,” said Tricia Burns, owner of Ignite Studio,  “Duane is committed to improving his health and living his best life.” Duane has improved not only his physical health but he has provided motivation to so many others in the community. “I can’t say enough about Tricia and the ladies here at Ignite,” said VanRoyen. They have given me the confidence I really needed and have been part of my routine from day one, even Marty, he said. . . . I can’t forget Marty,” he joked.
While pointing to some of the weights he uses in his workouts he said, “I really didn’t think I would be doing this for more than a couple three weeks." A few snow days have kept him away, but he has been committed to this since the very beginning. “Committing himself to three days a week, rain or shine,” said Burns, "you can find him in the weight room.  He pushes himself to increase the amount of weight he lifts and continues to improve his health every week.”
Duane is moving to Pierre where he will be able to live and get around more independently. “We will miss Duane here at Ignite,” said Tricia. “He has been an inspiration to a lot of people that work out here.” After the picture session, Duane had time for one more comment before he started one of the 22 minute workout sessions. “I have been blessed with many guardian angels, and Tricia Burns, you are one of them,” said VanRoyen.