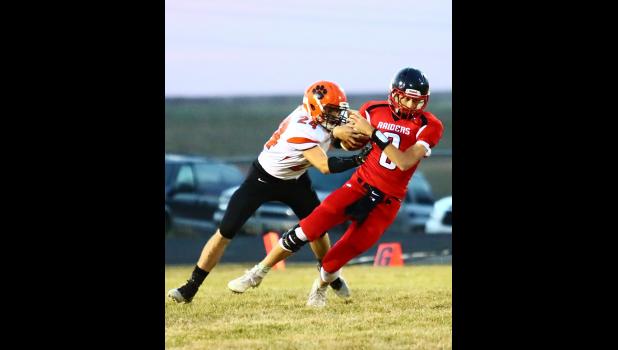 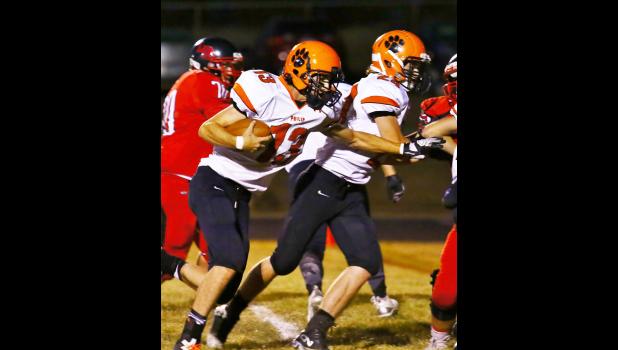 Scotties give mercy to Raiders

The Philip Scotties traveled to Presho, Friday, Sept. 30, to scrimmage with the Lyman Raiders.
What could be called a live-action practice session by the Scotties was cut short at halftime, when the game was called according to the mercy rule. The Scotties passed the 50-point lead mark, and the second half of the game was not played. Starting ball carriers Nick Donnelly, Dawson Reedy and Dalton Kinsley were escorted by teammates into the end zone enough times to rack up 54 points in the first two quarters.
Firing up their domination, the Scotties gave the ball to Reedy at the 14-yard line. He made the touchdown, and Kinsley followed up by making good on the conversion play.
A bit later, the Raiders were forced to punt. Kinsley got the ball, and his teammates made way for him to cover the 50 yards to the end zone. The extra point attempt failed.
The ball was consistently handed to Kinsley, as openings were made for him to next go 35-yards for a touchdown, then 34 yards for another touchdown. Both extra point attempts failed.
The Philip defense completely stymied the Lyman team, with the Scotties regaining possession of the ball often and quickly. Philip controlled the running game so utterly that no pass attempts were made. Only one punt was made during the game, and Lyman learned the hard way to not try that again.
As the joke goes, the Scotties are so good that, in instant replay they gained even more possessions and even more yardage. So went the second quarter over the first quarter. The ball, again, was handed to Kinsley, who was ushered by teammates the 35 yards to the end zone. The extra point attempt failed. Quarterback Reedy kept giving the ball to starter Kinsley, who this time delivered it 40 yards for a touchdown. Donnelly stepped up to make good on the conversion play. After the ball, again in Kinsley’s hands, was taken on a 50-yard run to the end zone, Donnelly again came through for the conversion points. The merciful last play used to call an end to this practice scrimmage came when Kinsley was given the ball at the 50-yard line, and he carried it in for the final touchdown of the game.
Philip did slow the game just a tad with one penalty, for 10- yards. Lyman was called for two penalties; one for 10 yards and another for five yards.
Though dominating the scoreboard, the Scotties earned seven first downs, while the Raiders earned six first downs.