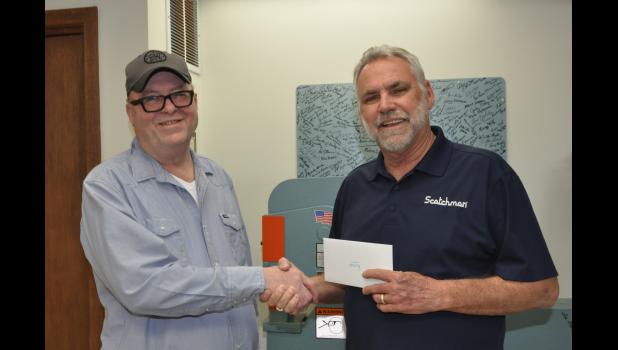 On April 22nd, Richard Stewart joined the growing club of 35+ Years Employment with Scotchman Industries.
When Richard joined Scotchman Ind in 1987, he worked in the material handling department. Richard worked in this department until fall of 1990, when he moved into the parts room.  After approximately a year in the parts room, Richard moved into customer service where he continues today.
Scotchman’s customer service department has changed and expanded over the years.  When Richard first joined the department, only two product lines were offered – ironworkers and cold saws.  As Scotchman added product lines, Richard also expanded his product knowledge.  Today Scotchman has seven separate product lines with many different models in each.  Richard’s calm, professional demeanor and vast product knowledge is very valuable in his daily routine of taking phone calls - helping customers trouble shoot and/or place orders.
Richard says that many things have changed over the years, all for the better.  “I’ve had the privilege of working with so many good people.  It has been a pleasure to be part of the Scotchman family.”
Mike Albrecht, National Sales Manager, says “Richard is a pleasure to have on the customer service team.  He has a great attitude and after 35 years has accumulated a wealth of knowledge about our products.  Richard seems to have a knack for remembering part numbers.  You can ask him the number of most any common part and he knows it.  After 35 years you can’t tell Richard’s age by his memory.  He’s still got it!”
Jerry Kroetch, President, says “Richard is a very vital part of our customer service team.  His years of experience and depth of product knowledge is a great asset to the Company.   We certainly hope he stays with us for many years to come.  Thank you, Richard!”