Skip to main content
Home / Pioneer Review / A return to Vietnam, one POW’s journey to meet his past 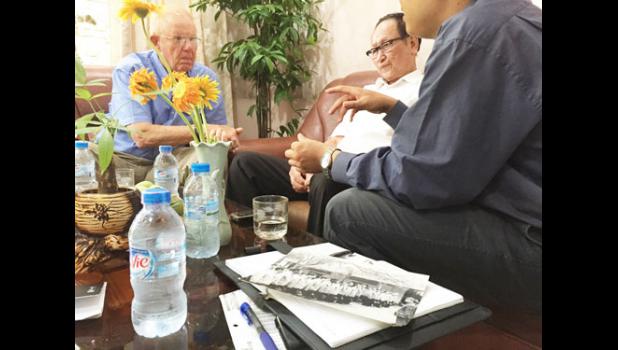 A return to Vietnam, one POW’s journey to meet his past

By:
Chastity Julson and Nancy Haigh
It is an era many people wish to forget, not only the veterans who fought on foreign soil, but those left at home and those who protested so vocally about the Vietnam War.
In earlier wars the soldiers knew they had the support from the home front, while not making things easier, it did provide some comfort. But for those who served in the United States Armed Forces  in Vietnam, they returned, not to a hero’s welcome, but, in many instances, to people shouting obscenities at them.
Past and present met for the first time in nearly 50 years as Sioux Falls artist and historian John Mollison traveled with retired U.S. Navy Captain Charles “Charlie” Plumb, an ex-POW of the Vietnam War, to the ground he fought over as well as to the place he lived for 2,103 days (nearly six years) as a prisoner of war.
The Naval Academy graduate was just five days away from returning home to his wife and family. when he was shot down.
Charlie and Radio Intercept Officer Gareth Anderson, were soon captured and taken to the Hoa Lo prison, known popularly as the “Hanoi Hilton.”
John is the host and creator of the Web show, “Old Guys and Their Airplanes.” The show’s episodes feature John telling a combat veteran’s story through a drawing of that particular veteran’s aircraft. For John, this is a way of bringing life to history.
“My stories go beyond the ‘names, dates and places’ that so much of history seems focused upon. I interview war heroes because I believe that their trials, trauma and subsequent life provide us with a unique but valuable filter in which to view life,” said John.
Read the full story by subscribing online to any of our newspapers, or in print. Enjoy the related videos on this site or on our Facebook page.