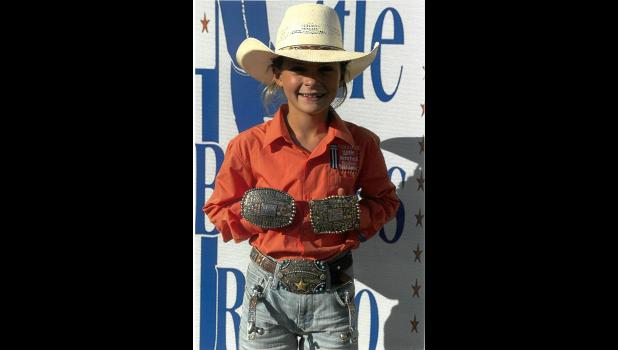 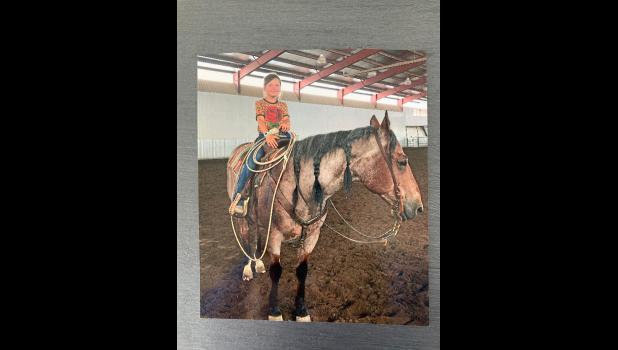 Charlee Ramsey, age 9, recently competed in the National Little Britches Rodeo in Guthrie, OK where she competed in the Little Wrangler Goat event. She finished the weekend placing fourth in the short go, third in the average, and third in the WORLD overall in her event and age division! Charlee is the daughter of Chad and Paulette Ramsey.
I asked Charlee to describe some of the excitement of Guthrie so, she showed me a video of her riding Gus in goats; the video was a blur.  Charlee is on Gus and they are both focused on the goat.  When they get the signal they are out of the gate in a flash with Charlee hugging Gus.  She bails off while still moving and is at the goat in another flash. She quickly grabs the ribbon off the goat and sprints back across the finish line. Then, the flagger gives the signal.  She explained she did this three times and the average was about 7 seconds!
I asked her what she did next, “As soon as I went out the gate I uncinched my horse because his cinch was really tight.  I took off his shin boots and overreach boots to take care of Gus.  Then, I walked him around to cool him off and took him to his stall.  I unsaddled him and left him there and then we walked to the arena to check the papers (standings).  This took an hour or two to get the scores figured.”
Paulette explained that Charlee went into the short go in 8th place and ended up 4th in short go, 3rd in the average, and 3rd in the world.  That is when Charlee got really excited!
Charlee explained more,  “I won 9 buckles this year and I got really excited when I found out I was 3rd in the World in goats. ”
Who else did you see from Philip:  “Mainly my cousin Christopher Lurz who is 13 years old.”  Christopher is the son of Carrie and Dustin Lurz.
Charlee explained a few more of her activities. “I belong to Badlands Little Britches and also 4 H Rodeo.  Gold Buddy is my barrel and pole horse and Gus is my goat and flag horse.  I would like to thank my parents for all the hard work they do for me.”
Charlee continued the description of her horses:  “Gus is my goat and flag horse and Gold Buddy is my barrel and pole horse.  Gus was trained by Rob Brown in Nebraska and I trained Gold Buddy myself.”  That is an amazing statement for a 9-year old person who won her first buckle at age 8.  Gus is a ranch horse and works every day, explained Chad.
Charlee’s NLBRA (National Little Britches Rodeo Association) buckle has 4 diamonds for 3rd place; diamonds are the most valuable.
“I’m wearing my Dudes (shoes) right now,” said Charlee, when I asked her why she was not wearing her boots with her spurs.  “My spurs are in the garage.”  She normally wears a cap while working and her hat with piggin string while riding in rodeos.
According to Paulette, “At 8 years old Charlee won the Jr. Girls all-around at the Winner Jr. Rodeo.  It was her 1st buckle (the one with the big star) and talk about excited!”