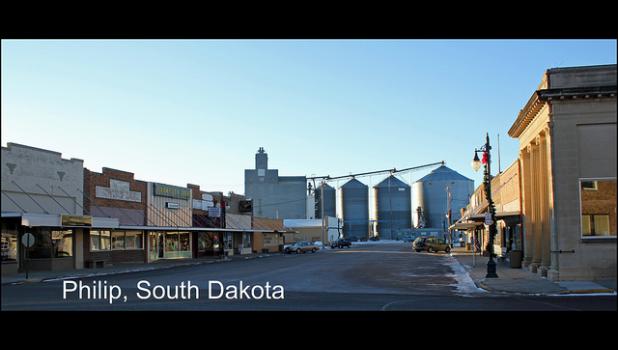 Philip chosen as Philanthropic Community for 2016

We are proud to celebrate with the community of Philip and congratulate them on their success."

The South Dakota chapter of the Association of Fundraising Professionals has chosen Philip as South Dakota’s Outstanding Philanthropic Community for 2016.
The award will be officially presented during a National Philanthropy Day banquet Monday, Oct. 3, in Sioux Falls. Nominations came from members of the AFP across the state and are chosen by a committee that reviews all of the nominations in each category. Stephanie Judson, president of the South Dakota Community Foundation, is the person who nominated Philip.
The nomination included a lengthy “shopping list” of Philip area fundraising goals, accomplishments and results over recent years.
The letter of announcement was sent to Ray Smith, the new chairperson of the Philip Area Community Foundation and the primary contact to the foundation. Though Smith and the foundation may be representing Philip, the community of Philip is being honored – no particular organization, just the collective community.
“Historically, this award recognizes the most giving  communities in our state,” said Judson. “We had the honor of working with the community of Philip as the community came together to raise $100,000, obligating $150,000 in commitments from DeMaris Nesheim and the South Dakota Community Foundation.  The record pace of their success made the community a clear choice to be nominated for the Governors Philanthropic Community of the Year award.”
Nesheim and the community of Philip were assisted by the South Dakota Community Foundation, which helps people reach their philanthropic goals and strengthen communities by making charitable donations do more. It simplifies the process and grows charitable donations through careful investment.
Nominations for the AFP awards are accepted each year in the following categories, shown with the 2016 winners: Outstanding Philanthropist – Craig and Pat Lloyd, Sioux Falls. Outstanding Philanthropic Community – Philip. Outstanding Philanthropic Corporation – Delta Dental of South Dakota. Outstanding Volunteer Fundraiser – Ken Wintersteen, Olivet. Outstanding Youth in Philanthropy – Ashley Heupel, Sioux Falls. The awards are traditionally presented by Governor Dennis Daugaard, if his schedule allows.
“As we worked together to establish the Philip Area Community Foundation, we witnessed firsthand a great sense of pride in community and a culture of giving that seems to come naturally to those who call Philip home. They were a clear choice to be nominated as the Philanthropic Community of the Year and we are glad the selection committee agreed with us. We are proud to celebrate with the community of Philip and congratulate them on their success,” said Judson.
Criteria for the community award included evidence of significant and wide-spread philanthropic support of community members through financial, in-kind and volunteer support. Description of the impact the support and achievements accomplished through the groups’ philanthropic efforts. Evidence of encouragement and motivation given to community members to actively participate in philanthropy and community involvement.
“We nominated Philip because of our work in 2015 and early 2016 with the formation of the Philip Community Foundation. All of the various activities that the community does is indicative of their commitment to the betterment of the community. There wasn’t any question of the community to nominate – Philip was an obvious choice,” concluded Judson.
Angie Kuiper, AFP chapter administrator, stated in the announcement letter to Smith, “At the dinner, you will be introduced, and your (community’s) tremendous philanthropic work will be highlighted. We hope you would be willing to share a few words in response. Everyone at the luncheon will be interested in hearing your thoughts on giving and how philanthropy has influenced your community.”
The Association of Fundraising Professionals represents thousands of members in 235 chapters throughout the world, working to advance philanthropy through advocacy, research, education and certification programs. The association fosters development and high ethical standards in the fundraising profession.
The S.D. AFP chapter was formed in 1986 so that fundraisers in South Dakota could be a part of an organization that fosters professionalism and high ethical standards, promotes networking among fundraisers, and offers opportunities for continuing education. For three consecutive years, South Dakota AFP has earned the Ten Star Award, which honors those chapters who have accomplished key objectives outlined in the strategic plan. The S.D. AFP offers continuing education during its annual conference and at other periodic trainings throughout the state.