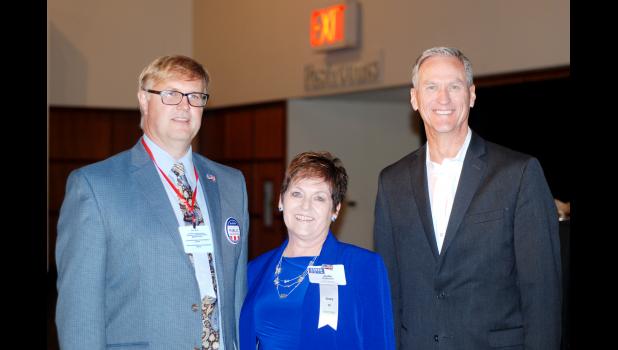 By:
Del Bartels
Anita Petersen, a member of the Haakon School District Board of Education, has begun her one-year term as the president of the Associated School Boards of South Dakota.
Peterson takes charge of the 18-member board of directors, which she has sat on since 2008, representing the association’s Western Region at the 266-669 enrollment category. She was recently re-elected to her ASBSD board seat this year, with her third term beginning this past week.
“I am so thankful for the opportunity to lead this association,” Peterson said. “ASBSD will continue to work hard for all of the children of South Dakota.”
Peterson has been a member of the Haakon School Board for 24 years. During this time she has served five terms as vice chairman and as a member of many school board committees. Peterson has served as an ASBSD delegate, completed multiple trainings and attended many ASBSD events.
“Anita has a vast knowledge of public education and school board matters, both locally and statewide,” said Wade Pogany, executive director. “ASBSD will continue to thrive under her direction and we’re so appreciative for commitment to lead.”
Paulette Ramsey, fellow Haakon School District board member, said, “Anita is a very special person to be putting so much time and effort into her position, always willing to listen to every side with a smile on. The love that she has for this school and community shows through her actions. Thank you and congratulations, Anita.”
Doug Thorson, also a Haakon board of education member, said, “Anita’s rising to the position of president shows how hard she has worked to keep Philip on the map when discussion of school needs comes up.”
Haakon board member Jake Fitzgerald, added, “Anita will do a great job providing leadership to the ASBSD.”
Peterson succeeded Eric Stroeder, Mobridge-Pollock, who now assumes the role of ASBSD past president. The board of directors is made up of local school board members elected from four geographic regions (central, northeast, southeast and western) and five enrollment size categories (265 and under, 266-699, 700-1,399, 1,400-9,999 and 10,000 and above). Peterson pointed out that Philip’s Keith Emerson was also ASBSD president many years ago.
Special guest at the convention were Miranda Beard, Laurel, Miss., who is the president of the National School Boards Association. Peterson reported that Beard believes the bottom line is all about the children, and that many of her trips are in and out, but this one to South Dakota was truly memorable. Another notable guest was Neal Putnam, a Mitchell school board member and the first ever NSBA board member from South Dakota.
The annual conference, Aug. 8-9, saw over 400 educators in Sioux Falls for ASBSD business and a variety of learning opportunities.
ASBSD is a private, nonprofit association representing more than 800 South Dakota school board members, the 150 school districts they govern and the students they serve. Our vision is leadership to achieve excellence for South Dakota public education through a mission of partnering, advocating and leading.