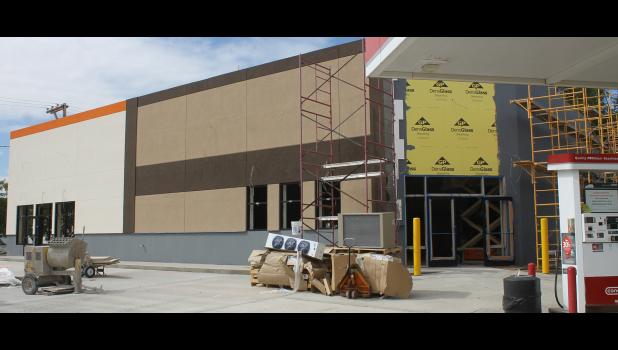 The Corner Pantry convenience store in Philip is on schedule of its rebuilding from the ground up.
“We’re coming along pretty good. Haven’t had any major setbacks,” said Drew Poljansek, job foreman for the M.G. Oil project.
M.G. Oil Company is based in Rapid City. It is affiliated with Corner Pantry, a division of convenience stores throughout South Dakota.
Originally, the spot was the site of a Phillips 66 filling station. Howe Oil Company purchased the business from Dean and Janice Fitzgerald in 1994. It then became Boomers, a name that many locals still use. In 2003, it became the Gas Stop. In June 2011, M.G. Oil Company purchased the convenience store and renamed it a Corner Pantry. The malt beverage license was transferred from the former business to the present one.
The new building will continue to have a room designated for casino machines. On top of that, there will be an A&W restaurant, including a drive-up window.
“Have a Sept. 22 deadline for the A&W to open. Will want the convenience store to be open then, too, or a day or two behind. As soon as the C-store is up and running, so will the pumps,” said Poljansek.
By early next week, most of the C-store machinery should arrive and be installed. Poljansek said the inside wall area above the main doors will display a “history of Philip.” The interior north wall, alongside and above the coolers, will have a rustic, metal decor, with authentic windmill blades collected from this area on display. Access to the A&W drive-up windows will be by driving counter-clockwise around the building. Shown is the interior looking east. The A&W restaurant will be behind the camera.