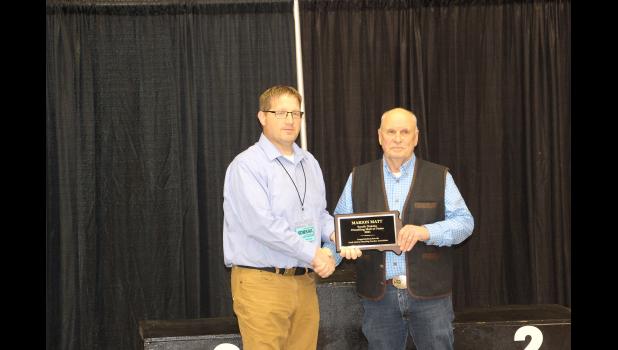 Matt inducted into Wrestling Hall of Fame at State B Championship

Information provided by the S.D. Wrestling Coaches Assoc.
“My family & I are avid wrestling fans. When I was in high school, wrestling was not offered, so I became familiar with wrestling when I volunteered to help with the kids’ wrestling program in Newell. Soon after that we moved to Philip and my oldest son wanted to wrestle, so I started helping with the program. It was always my belief that the AAU & USA kids wrestling programs are instrumental in having a good high school wrestling program so it only seemed natural that since all three of our sons wrestled: for the next 28 years, I volunteered as an organizer and planner for the AAU and USA wrestling programs and tournaments. Many hours were spent getting practices & tournaments together and many miles were driven taking wrestlers to camps & tournaments, helping coach, refereeing and generally just trying to keep things running smoothly. For 35 years I also really enjoyed coordinating, working and overseeing the Philip High School Tournaments which included several Districts and Regionals. One of the highlights was helping coordinate the Iowa Hawkeyes versus SDSU Jackrabbits dual in 1995 & the Belarus, Russia vs USA Freestyle Team dual in 1996. It was really all the volunteers that were always willing to help that made each tournament, event & wrestling season successful. Without them, it would not have been possible.
Wrestling has always been important for our family as we have attended 32 out of the last 33 state tournaments.
In 2007 our family, along with the Philip High School Wrestling Club, created the Trent Matt Memorial Award. Each year this award is given to the Region 4B 160-pound champion in memory of our son Trent who won the regional championship in 2002.”
- Marion Matt