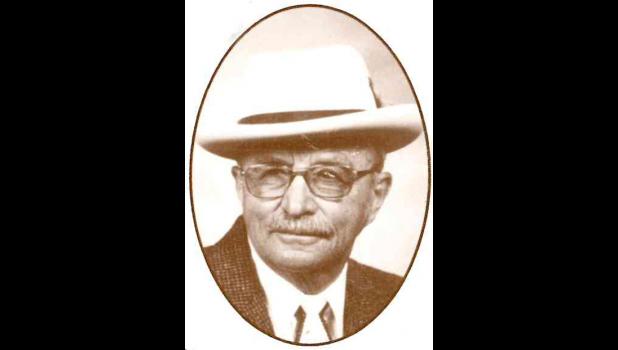 by Phil Hogen
Marvis Hogen was born and raised on his Norwegian parents’ homestead north of Kadoka. Florence Brown was born on the Pine Ridge Reservation south of Kadoka. They attended school in Kadoka in the 1920s and 1930s where they faced hard times and learned the value of hard work and a dollar.
While Marvis was training for his 30 combat missions as an Army Air Corps bombardier over Germany, they were married. After his discharge, they started a hardware store in Kadoka that they and their children ran for 67 years. That business is still operating on Kadoka’s Main Street.
The early years for the Hogens were in a house, built on an old sheep wagon, that adjoined their hardware store. The hardware store soon needed that house space, and, in 1953, Marvis and Florence Hogen built their new house on what was, then, the west edge of Kadoka, right next to the home and clinic of Dr. N.J. Sundet, a life-long friend.
With its full basement, brick façade, two fireplaces and redwood living room, the three bedroom home was the warm, lively place where children Phil, Randi, Baxter, and Cash Hogen grew up, and was often the setting for many of Kadoka’s church, business, and political leaders to meet and be entertained. Local contractor Keith Brakke and his local crew, together with Marvis and their hardware store crew, built and equipped the home. It was later expanded to include a finished basement and an upstairs bedroom, with the house surrounded by a lawn and trees they had planted when the home was built. A lot of Kadoka’s history unfolded around the dining room table in this house, where Florence lived until shortly before her death at 95 last year. Marvis had preceded her in death in 1997.
As a hardware family, they knew quality goods, and often had the first appliances and gadgets of their kind in Kadoka. They seldom threw anything away if it still had some good in it. Their home and possessions reflected the history and culture of the Badlands plains. They acquired a ranch which adjoined the Hogen homestead, and Marvis had an active political career as state legislator, state secretary of agriculture, and state director of the Farmers Home Administration. They developed an interest in traveling the world.
Their possessions, which will be sold at auction in September, truly reflect the history of successful lives lived to the fullest in Western South Dakota.