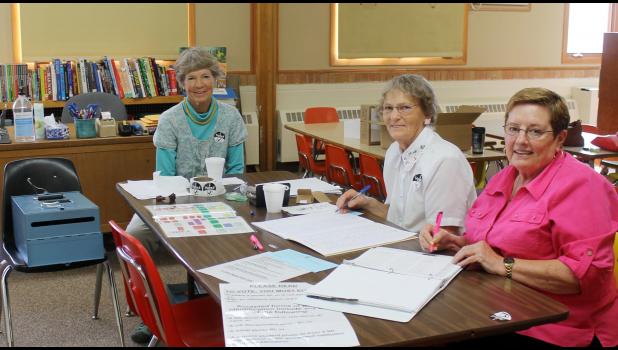 Registered voters with the Haakon School District voted for a $9 million general obligation bond referendum, during a special election, Tuesday, Aug. 23.
During its Nov. 9, 2015, meeting, the board of education first discussed what building architect representatives had suggested in the way of a basic blueprint for a future school building. The suggested blueprint included 40,000 square feet, at $200 per square foot. The basic description was two wings extending north from the present high school. Security, including a main door through which visitors would have to be buzzed in, was a vital aspect of the plans.
Since then, the issue of a $6 million dollar remodel or a $9 million rebuild has been a major topic of the board of education and the community.
At the April 2016 board meeting, Toby Morris, Dougherty & Company, LLC, Pierre, updated the school board on how recent teacher-pay legislation will also affect the district’s building plans. The South Dakota legislature passed Senate Bill 131 during the last few days of the session after defeating it earlier. The bill, among other things, added a half cent sales tax with funds to go toward teacher salaries.
The bill also addressed school district’s capital outlay funds, which affects Haakon School District’s plans to build a new facility. The bill was to help keep capital outlay taxes down, as some districts were amassing huge capital outlay levels. Another part of the capital outlay portion stated that a district, when requesting a taxing amount, will switch from a mill levy amount to a per student amount of $2,800. A capital outlay cap will also be put into effect. The maximum dollar amount that can be collected can be increased by either three precent or by Consumer Price Index (CPI), whichever is less. The CPI, Morris said, has been at zero different times. So, in some years there may be no raise in the amount.
The Haakon School District Board of Education can leave the mill levy at three dollars for four years, until this new formula goes into effect. Because of the legislation from Pierre, the district felt it had to sell general obligation bonds to build the facility rather than issue capital outlay certificates. The board would be unable to raise the $6 million needed to remodel the current facilities before the 2021 change. Morris noted that the remodel project would have to be scaled back to $4 million.
At the board’s April meeting, the board passed a resolution to seek general obligation bonds, thus sending it to a vote of the school district’s residents    .