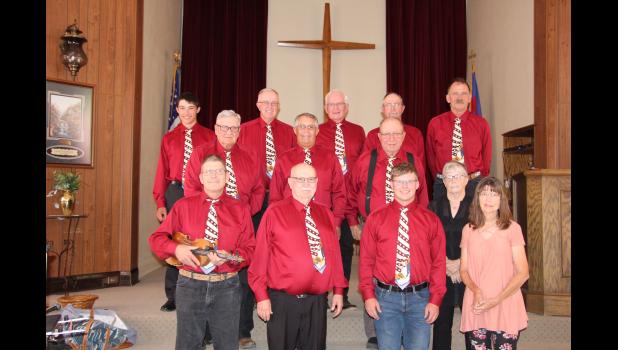 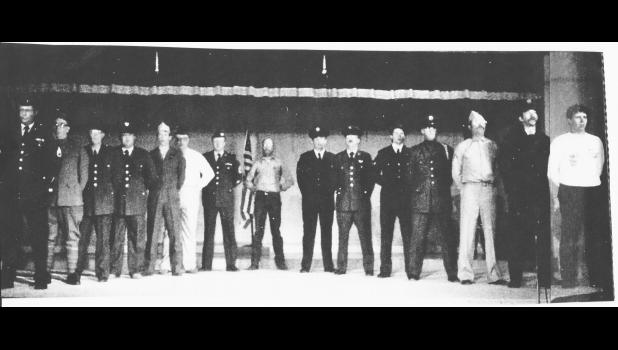 The history of the Haakon County crooners began in 1990, when the town of Midland was celebrating its centennial and all school reunion. The reunion committee contacted the Holsti Sisters, who were a musical family from Buffalo, up in Harding County. The Holsti Sisters agreed to come to Midland to provide entertainment, and they requested to have a local men’s chorus to sing the National Anthem and the four military service hymns as part of the show. As a result, Marlis Doud rounded up a group of guys and they began working on the songs and used her basement as a practice room. Marlis recalls that the group started with 14 or 15 guys, and her as the accompanist. “When we were done with that show in June,” she said, “we were having such a good time that we decided to try organizing in the fall of that year and see what would happen.”
In the fall of 1990, the group gained a few more voices and Marilyn Millage began as the accompanist. Marlis then became the “full time” director of the Crooners. Practices were moved to the music room at Philip High School on Sunday nights. There were a number of suggestions for a name for the group. A vote was taken and the result was to name the group “The Haakon County Crooners.”
Marv Cihak, of Philip, was the agent for National Mutual Benefit Insurance at the time the Crooners started. Marv and his insurance agency donated $300 to get the group started with music and vests. NMB also sponsored us that winter when we did our first outdoor performance at the Lasting Legacy Memorial on Philip’s main street. Each of the Crooners also contributed money, which was used to purchase the first keyboard and mixer system.
In January of 1991, the crooners began working on their first full concert. The Gulf War had just started and we did a lot of patriotic music which was very well received.
That set the stage for us and we tried to do a couple of concerts each year. Then we began receiving requests to sing for other events which included anniversaries, annual meetings, funerals, some weddings, benefit fundraisers, etc. Appearances have included Mt. Rushmore and many times at the State Capitol during the Christmas season. There has never been a set fee requested for any performance. We have always just accepted whatever anyone felt they could give us. We also ahve recieved a lot of memorial gifts through the years. These allowed us to update our equipment, buy microphones, sound system and additional music. The Crooners have provided a scholarship, in the amount of $200, to any second-year college student from Haakon County with a major or minor in music.
After 30 plus years, it was our intention  to “semi-retire” and cut our practices back to one or two times a month. We wanted to still do special concerts, such as Christmas and Cancer Care Fundraiser benefits, but with the onset of Covid, our plans were changed. We were able to do a recording for Memorial Day, and were working on a virtual Christmas concert, when we made the decision to stop gathering together for safety and health reasons. Through the following months, we realized how much we missed not only the musical performance aspect, but the fellowship of our Crooner “Family” With that in mind, we have the intention of performing a concert of “HOPE and HEALING for our COMMUNITY and COUNTRY.”
The Crooners are made up of people from many different vocations and backgrounds. Our member numbers have fluctuated over the years, but remain pretty consistent with 12-15 members. We have been fortuante, in recent years, to have a violinist/guitarist and a bass violin player join us. Five of the original are still singing, and we have some singers now who were not born when we started! We share a great fellowship and comradery as we rehearse and perform. We are blessed to have had this opportunity in our lives, and, as always, it is our pleasure and our hope that we can be a blessing to others.
Concert:
Sunday, August 22, 2021
4:00 p.m.
American Legion Hall, Philip
Please join us for an afternoon of Music, Homemade Ice Cream, Cookies and fellowship