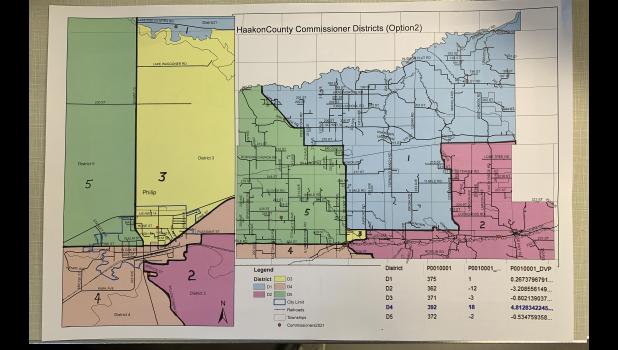 Thursday, November 18th the Haakon County Commissioners met for a special meeting to consider two county redistricting proposals and to discuss an ordinance to regulate medical cannabis within Haakon County. All commissioners were present.
First on the agenda was redistricting of the county. Two options were presented to the commissioners from David Reiss of the Central South Dakota Enhancement District (CSDED). The goal of redistricting is to balance the populations within each district, bringing the ideal deviation to below 10%. In Haakon County, the optimum population per district is 374.
Plan 1 would have moved: one city block in Philip from District 4 to District 3; a triangular section (including a portion of the City of Philip) on the east of Philip from District 4 to District 2; a township section in the southwest corner of District 4 to District 5; and a section of District 1 to District 2 north of the Midland area. The deviation of Plan 1 was 8.02%.
Plan 2 had only one change from the current district map. That change will add one and a half townships from District 1 to District 2 on the east side of the county, north of Midland. The deviation of Plan 2 is also 8.02%.
After considering each option and some discussion the board of commissioners voted to adopt Plan 2. After the second reading, the auditor will make the appropriate changes in the system and will notify the affected voters of the changes.
Next on the agenda was a discussion on an ordinance to regulate medical cannabis. Deputy Auditor Stacey Pinney presented information that she has gathered from the research she has done. The commissioners discussed the various topics as they were presented. Pinney had also gathered information about how other counties in the state are regulating the sale of cannabis. Some, but not all, topics that need to be addressed in the ordinance are number of dispensaries allowed, days and hours of operation, application fee, annual renewal fee, and penalties for violations. Any dispensaries within a municipality will be governed by the municipality. There were several legal questions brought up in the conversation that will need to be answered by legal counsel. States Attorney Marty Jackley was not in attendance at the meeting.
It was approved to have the first reading of both ordinances at the regular meeting on Tuesday, December 7th.
Before adjournment two non-agenda items were discussed. One item was an update on the geothermal well repairs. Brittney Smith with the City of Philip office is in the process of trying to get some information on the progress of repairs. The second item brought up was the building of a new fire hall at Milesville that could possibly house a county road grader. This project will not be started until next spring and does not need to be placed on the next agenda. No decisions were made on either topic.
A livestream of the meeting can be watched on the Ravellette Publications, Inc. Facebook page. The auditor's meeting minutes will be published in a future issue of the Pioneer Review.