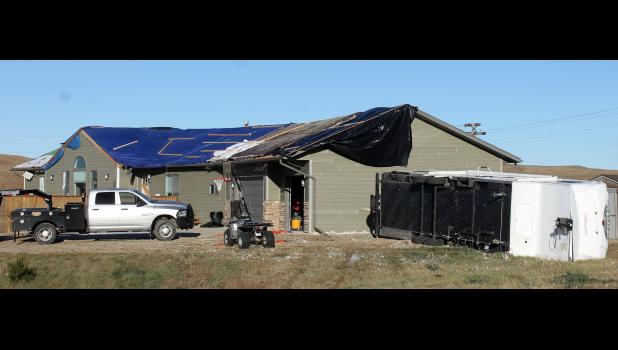 By:
Del Bartels
About a quarter after, there was a roar and the house started vibrating …

Around 5:00 p.m., Monday, Oct. 3, Jake Fitzgerald and his youngest daughter, Camden, were at home. He was aware of the storm brewing. He put the vehicles in the garage, and never thought much more of it.
Then it hit.
“About a quarter after, there was a roar and the house started vibrating,” said Fitzgerald. “I saw insulation drop in the house, grabbed Camden and ran downstairs for safety.”
After everything happened, most of the roof was exposed. Water was leaking through the ceiling and down the light fixtures. The electricity was still on. It was still raining, though the storm was coming to an end.
“After that, kind of got my bearings,” said Fitzgerald. He phoned one friend and one family member. His intent was for them to contact others to see if they could come help to patch the roof. “Within about 20 minutes around 15 people were out here to help. Within half an hour or 40 minutes well over 30 people were helping patch up the roof and move furniture inside the house,” said Fitzgerald. “My wife, Aaron, and I were very thankful, absolutely.”
Neighbors started work when there was still daylight, and continued working under artificial lights. The last of the work crew left around 9:30 p.m.
Fitzgerald was now home with just his family. “Everyone was rattled at first. But my wife and I explained to our kids that the important thing is no one was hurt, and all the damage that was done can be fixed,” said Fitzgerald. He and Aaron spent the night in the house, while the kids slept at their grandparents’ house.
They are very thankful for family, friends and the community.
“Everyone just worked well together,” said Fitzgerald. “Different people brought all types of tarps and boards. I’m not sure yet where everything came from. I’m just thankful for everybody showing up and in such a short amount of time.”