Skip to main content
Home / Pioneer Review / Electricity is on! 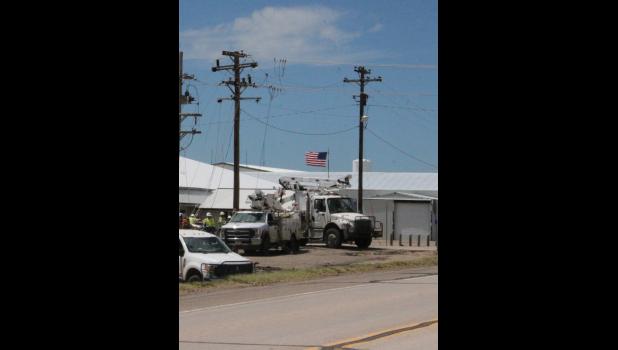 Thank you West Central Electric
Last week Mother Nature reminded us of her power and communities were left literally, picking up the pieces. “As everyone is aware, we experienced three consecutive nights of severe weather that raised havoc with our electrical system and our members’ personal property,” said West Central Electric CEO/Manager, Jeff Birkeland. In total, West Central Electric lost 69 transmission poles and 297 distribution poles. “Although the 297 distribution poles might sound alarming,” said Birkeland, "the 69 transmission poles are far more critical. Our transmission line system is the backbone of our electrical system.” A comparison of the Transmission electrical lines made by Birkeland would be the main line for the West River Lyman Jones water system. "If you lose your main water line, nobody is getting any water, or in our case, electricity. At one time, we had 2,300 meters without power,” said Birkeland. "Shortly after repairing the main transmission line we went from 2,300 meters without power down to 60. That’s how critical a transmission line is for us.”
Early on in the storm it became evident to West Central Electric they needed to bring in outside help to restore power. “We hired Keller Construction and Keinz Construction from Rapid City to repair our transmission line,” said Birkeland.  “We also had linemen from the following SD Cooperatives onsite to help with storm repair; Lacreek, Moreau-Grand, Cherry Todd, and West River.” In total there were 68 linemen working on repairs to get the power restored to areas in and around the Philip, Kadoka and Midland areas.
As of Tuesday morning June 21st, not everything is as solid as it needs to be, noted Jeff Birkeland. "Figuratively speaking, we have band-aids and duct tape holding things together in spots.  Our transmission line is not 100% as we still have 43 poles to replace before we have 100% functionality.” said Birkeland. This is priority number one and we will continue to make progress every day but it will take roughly a week to make these repairs.”  Other outstanding issues are finding the weak spots in the rest of our electrical system. West Central Electric linemen will patrol the lines looking for these weak spots and get them corrected. “It takes time to patrol hundreds of miles of line,” said Birkeland. Some of these weak spots will show up when the wind blows and become outages. So we don’t want to mislead anyone, even though the power is on, we still have a lot of maintenance to do before we are back to 100%.” Both Philip and Kadoka have just a one way feed on transmission lines to the area. West Central Electric was more than a little nervous about the upcoming storm on the radar. A storm threatened the lines Monday night but those out on the front lines held it together. “The good news is that we have transmission line contractors onsite so outage time will be minimal depending on (any further) damage,” said Birkeland.
“I’d also like to take this opportunity to give a ‘heart felt’ thank you to our members! At a time when our membership could have been upset and come head hunting, they didn’t. In fact just the opposite happened. We had members asking what they could do to help. Their basements were flooded, their homes were tore up, but yet these members kept asking what they could do to help. I have never felt more proud and blessed to be a part of West Central Electric. Our members are second to no one! In fact, if we could get our members in congress, they would have this country turned around in no time. I am also of the belief that South Dakota is the only place where common sense still prevails.”