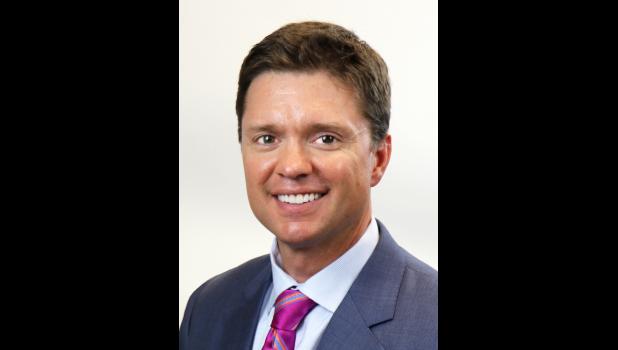 Chris Ekstrum was named the president and chief of operations of the First National Bank in Sioux Falls. Bill Baker will remain chairman and chief executive officer. Ekstrum is the first nonfamily member to lead the bank since 1909.
Baker was prompted to work on his succession plan when Dick Corcoran, executive vice president of wealth management and trust, announced two years ago that he would retire at the end of 2016. Corcoran had been Baker’s successor in the bank’s succession plan, which is required by regulators.
As president, Ekstrum will oversee many bank functions including agriculture banking, correspondent banking, the Advantage ATM Network, business banking, cash management, retail banking, residential mortgage, brokerage, marketing, human resources and training.  Over the next few years, Baker will continue to transition other departments over to Ekstrum.
The First National Bank in Sioux Falls has over 270 employees and 18 locations. In addition to the Sioux Falls locations, there are branches in Baltic, Brandon, Dell Rapids, Harrisburg and Flandreau.
Ekstrum began his career at the bank in 1993 as a management trainee. Then, he became a personal banker, small business lender, business banker, business banking manager, and most recently had been executive vice president and chief banking officer.
“Chris is a proven leader with years of executive level experience in leading First National's business, ag and residential mortgage lending teams,” said Baker. “He has a wealth of connections in the Sioux Falls community. Over time, Chris emerged as the logical choice as my successor.”
Ekstrum said, “The values of First National Bank were a natural fit for me; my father was a bank president and my mother a school teacher and mayor. They taught me at a young age the importance of supporting the community that supports you.” The motto for the First National Bank in Sioux Falls is “We Build Successful Relationships.”
Ekstrum graduated from Philip High School in 1988. He earned a business degree from the University of South Dakota in 1992 and did an internship with the Federal Reserve Bank in Minneapolis. Ekstrum has two children, and over the years has coached youth soccer, football and basketball. Ekstrum has run in the Twin Cities, Chicago and San Jose marathons. He was honored in 2006 as the Northwestern Financial Review Rising Star.
Ekstrum is the son of Charles “Charlie” and Nancy Ekstrum, Philip.