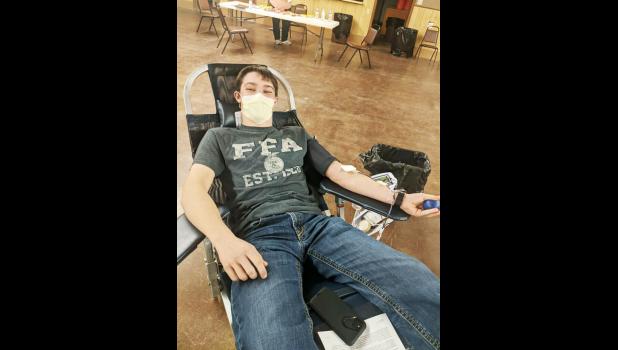 On Tuesday, November 17th, Philip hosted another successful blood drive. There were 49 donors scheduled for the Philip  Community Blood Drive. “We had 60 donors sign in and 43 were able to donate,” said Jennifer Ash, Vitalant Donor Recruitment Representative. “We collected a whopping 52 units in Philip. What a great day!” she added.
One noteable donor, Carson Daly, a junior at Philip High School, became a first time blood donor. As a newborn baby, Daly received a blood transfusion that ultimately saved his life. “His transfusion was a necessity to survive. He was born a month early and had complications from day one,” said his mother, Julie Daly. “He was in the NICU for 14 days. We were told on day six that he needed blood in order to survive. I got to hold him on day seven for the first time,” she added. Now, Daly says this is the beginning of what will become a lifetime of paying it forward. “I have a chance of saving someone’s life, like it saved my own,” he said.
According to family, Daly’s late grandfather, Bruce Kroetch, was also a lifelong blood donor. Kroetch was a multiple gallon donor and later in life he received blood transfusions that saved his life during cancer treatments.
Daly’s blood type is A negative, which means he can receive only A negative and O negative. His red blood may be used in order to help patients with A positive, A negative, AB positive and AB negative blood types; his plasma may be used for patients with O positive, O negative, A positive and A negative blood types and his platelets  may be used for all blood types (though type-specific platelets are used when possible or medically necessary).
Typically, the average adult has an estimated 10 pints of blood in their body. Roughly, one pint of blood is given during a donation. According to Vitalant’s website, a donor must be at least 16 years old to be eligible for blood donation. Along with other blood donation requirements, Vitalant requires 16- and 17-year-old donors to provide a signed permission form from a parent or guardian, if required by the state or school. “Some of the benefits [of donating] are helping those in need of blood, donating because I can and setting a good example for those who are questioning donating,” said Daly. “I have encouraged my friends who are of age to donate. I haven’t had any luck so far, but will continue to encourage them because it is so important,” he added.