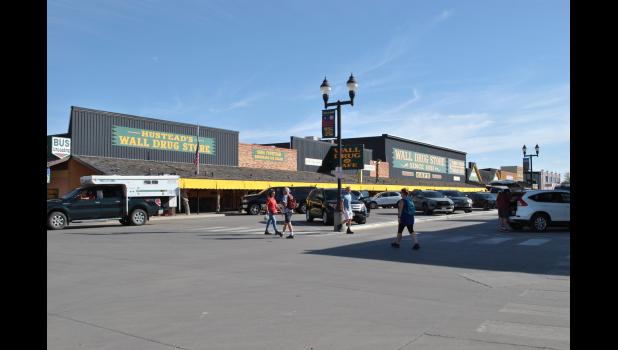 If you are a long time resident of Wall, you have probably noticed that this summer has been an un- usually busy year for out of town traffic.

In June, the Courant went on a quest to find out just how busy. This query was obliquely an- swered by the sheer volume of people we reached out to who just weren’t able to stop working to have the conversation.

Now that the summer is wind- ing down, and the view is clearer regarding just what happened, we were able to catch up with Sarah Hustead, Vice President of Wall Drug to discuss the boom in inter- state traffic that Wall has experi- enced during this time.

Back in June of 2020, the covid crisis took a toll on business at Wall Drug, dragging sales numbers down to -23% lower than the previous year. However, those numbers steadily rose as the summer had passed, and by the end of the season sales had bounced back to 8% above the 2019 season’s total.

This year started off with multi- ple record breaking weeks for sev- eral establishments, and Wall Drug was no exception. In June sales were up 90% over the pre-

This year was not without its challenges. Another phenomenon that was seen in Wall, across al- most every type of business, was a shortage of employees. Wall Drug was able to get through this boom in business with 165 of its target number of 200 staff. This was a marked improvement over 2019 though, which the establishment survived at 60% staffing (120 of 200).

Last but certainly not the least of the challenges was the issue of supply chain disruption. A number of items were difficult to acquire through vendors, as has become apparent. Just about everywhere one can catch a glimpse at a store shelf or menu nationwide, there are empty spots, or items that are unavailable.

Mike Nesseth, General Manager at Wall Auto Livery described a summer of shortages in a variety of items. Some beer, beverages, snack items, and especially ice have been tricky to come by. “We saw more RV’s this year, than any other year I’ve been here” says

Nesseth, a statement which holds some weight, as he has seen 16 summers at the Livery.

Luckily, Mike was able to stay fully staffed through the pan- demic, which he attributes largely to a veteran crew, and being well

taken care of, saying “We have good benefits, and are paid well.”

The increase in volume of gas sales at the Auto Livery follows suit with what was seen this year at Wall Drug, with an incredibly strong start in April, which touted

a 155% increase over the previous year. Overall the livery is at an overall 13% YTD increase over last year’s 12 month total, with Oc- tober thru December yet to pass.

Both Mike from the Auto Livery, and Sarah from Wall Drug noticed

an increase in RV traffic through- out the summer months, and what seemed to be a less frugal crowd of travelers. For whatever reason, the “a la mode with the pie” type of add ons came more frequently at the Cafe, and RV captains stocking their land yachts with sometimes hundreds of dollars in consumables seemed far more common this summer than years past.

Could this be because travelers who would usually explore inter- nationally have opted (or been forced) to keep their endeavors do- mestic this year? Although this is somewhat speculative, what has been confirmed is that inter- national travel has continued to be immensely impacted around the globe at an 85% decrease in the be- ginning of the summer world wide. Asia and the South Pacific saw the largest decrease at a whopping 95%. But, as every statician knows, correlation doesn’t nec- essarily equal causation. Wha- tever the case may be, the town of Wall is winding down this years tourism season with a substantial profit margin for business owners, and a sales tax revenue increase that is sure to yield benefits for the community as a whole.