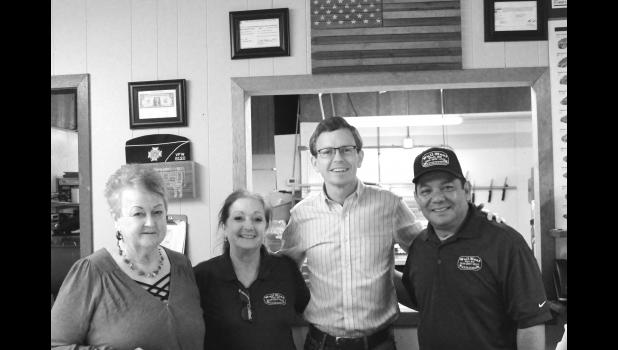 “We want to make sure that more Americans have a chance to buy South Dakota beef.” Dusty Johnson Representative (R-S.D.)

Ken Charfauros and his crew at Wall Meat Processing welcomed Representative Dusty Johnson for a tour of the facility on Thursday.
Johnson expressed appreciation for the plant’s dedication to feeding South Dakotans during the meat shortages brought on by the COVID-19 pandemic, and spoke about the relationship between beef production and South Dakota pride with Ken.
Charfauros explained that their prices didn’t increase, even as prices of other producers skyrocketed, because they wanted South Dakota beef to remain accessible to its citizens.
The cooperative shipping agreement that the USDA and South Dakota recently entered into is expected to broaden the national availability of SD meats. Congressman Johnson spoke about his favorable outlook regarding the arrangement, and summed up this portion of the conversation, saying “We want to make sure that more Americans have a chance to buy South Dakota beef.”
According to Johnson another need being met by this cooperative agreement is the American people’s increasing desire for transparency regarding the source of their meat, saying “People are more curious about where their food is coming from.”
Wall Meat Processing is planning to build a larger facility in the New Underwood area to accommodate steadily increasing demand. Ken says this new plant will roughly double their operation’s output capability. This planned expansion comes on the heels of a cyber-attack which crippled 9 of the country’s largest beef plants prompting calls for a more resilient and diversified food supply chain from Governor Kristi Noem.