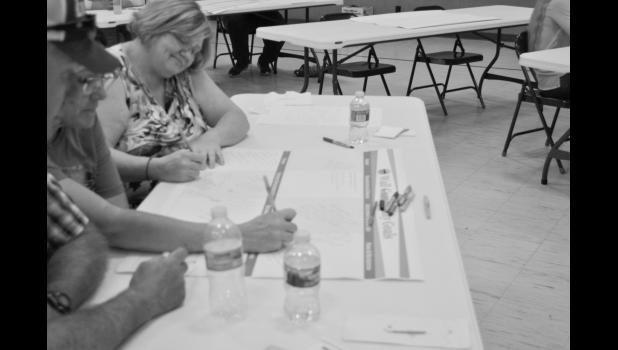 On Monday two  community visioning meetings were held at the Wall Community Center. At the second of these meetings, which was held in the early evening, 10 members of the Wall community were in attendance. Among this handful of people were staff from the city office, local business owners, residents, an educator, and a first responder. Although this group was varied, early on in the meeting the term “stakeholder” was defined by facilitators Lysann Zeller, and Kailey Snyder to include all of the above roles.Instead of the town hall type forum that one might expect to see at a small town gathering for a planning session, the meeting was held in a fashion that one might see in a brainstorming session at an entrepreneurial firm, in a phased approach with activities which seemed carefully designed to put each participant in an open and creative frame of mind.The first phase utilized a faux newspaper front page from 10 years in the future, where the participants filled in the body for a headline reading “2031 Community of the Year” with their take on why that headline might occur.The second was a small group activity where sticky notes, and poster size organizers were used to further detail how the ideas from the first round of visioning might be achieved.In between each of these short focus sessions, the facilitators asked each participant or group to share what they had conceived with everyone in attendance.Among the many ideas, ambitions, and concerns voiced were topics such as: affordable housing development, local service and product availability, job expansion, wage and benefit climate, resident retention, law enforcement needs, medical facilities, and medical first response locality.The purpose of the meetings was to give the organization facilitating the events - Black Hills Council of Local Governments - the input that they need to draft a new comprehensive plan for the future of Wall.Although the last version of this plan is still valid, it was drafted in 1979. The needs of small communities often change in ways which are difficult to anticipate such as technological advances, growth rate, and changing infrastructural demands.Based on input from the initial surveys and these visioning meetings, a new comprehensive plan will be developed, which will then be assessed at public planning and zoning hearings, and by the city council, in a process which will include open houses for community members.Any citizen of Wall is considered a stakeholder in this process, and can use these types of opportunities to voice your ideas and concerns. There was discussion toward the end of the session as to how these opportunities can be promoted openly, and made accessible to everyone who would like to be heard.Additional information can be found at wallsdplan.com, including survey responses, information on what a comprehensive plan entails, and progress updates regarding the planning process.