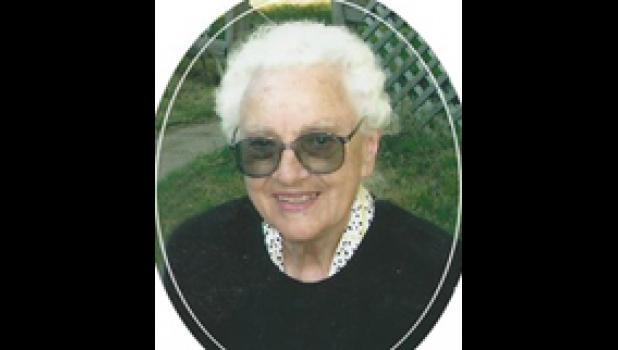 The Funeral Service for Ruth E. Rosenau, age 99 of Meadow were held at 10:30 am Monday, June 11, 2018 at the Coal Springs Community Church south of Meadow.  Pastor Jess Harkins  officiated and following a luncheon at the church the burial took place in the Hillview Cemetery at Isabel.
Visitation was on Sunday from 3:00 to the time of the family service at 7:30pm at the Coal Springs Community Church.
Serving as Honorary Casketbearers are Ruth’s nieces and her nephew are Active Casketbearers.
Ruth Elizabeth Rosenau was born June 3, 1919 at home on the family homestead southeast of Glad Valley.  She was the second of seven children born to William (Bill) and Wilhemina, “Minnie” (Picker) Rosenau.  Ruth lived at the “home place” until she left for college.  She continued to spend her weekends and summers there until she moved a trailer house to the Meadow community in 1974.  When she was 20 months old, their house burned down.  Ruth and Walter along with their dad and mom lived in a room in a wooden granary until fall when the new house was completed.  When the carpenter was urged to work faster, his response was “What’s the hurry?”  Ida was born in July while they were waiting for the house to get finished.  As the years progressed more siblings arrived.  Albert, Herman, Edwin, and then Lillian completed the family.
Ruth had many precious memories of her early years.  Life was simple; but good.  Once in awhile, on a Saturday afternoon, her dad would go to town (Isabel).  If the kids were fortunate enough to go along, they looked forward to the nickel they would get to buy an ice cream cone.  Ruth’s love of ice cream cones continued throughout her whole life.  Ruth attended grade school at the Irish Basin, Van Dusen and Winkelman Schools.  After three years of high school at Glad Valley, she transferred to Isabel for her senior year, graduating in 1938. During the following year while attending college in Aberdeen, she would walk 19 blocks to wash windows on Saturdays for $1.
Ruth started her teaching career in the fall of 1939 at the Winkelman School in Ziebach County.  Her salary for the year was $540.  Times were tough and the school district paid her in a warrant which wouldn’t mature for 10 years.   A local miser would “buy” the warrant from Ruth for a 10% discount.  Her sister, Lillian, was five years old at the time and started school that fall.  Lillian continued her education each year by going with Ruth where ever she was teaching.  The time they spent together was precious and over the years their relationship became invaluable to both of them.
Ruth loved children and she loved teaching.  After spending many summers continuing her own education, Ruth graduated from Black Hills State College in 1969 with a Bachelor of Science Degree in Elementary Education.  She influenced many young lives during her career and always enjoyed seeing her former students and hearing about their accomplishments.   She retired in 1995 after teaching for 56 years, almost exclusively at country grade schools in western South Dakota.  She ended her career teaching Title in Bison and was honored when Governor Janklow declared June 11, 1995 as Ruth E Rosenau Day in South Dakota.
After Ruth’s mother passed away in 1974, she moved a trailer house into Harold and Lillian’s yard.  When she wasn’t in school, her time was spent with her sisters, Ida and Lillian.  She loved helping them in their gardens and with preserving the produce.  Some of her other hobbies included playing Scrabble, crocheting, and writing poems.
Nieces and nephews loved to spend time “down home” with Ruth.  One year during Christmas vacation, the nephews took their BB guns along when they went to stay with her.  It didn’t take Ruth very long until she locked the guns away in the car trunk so that order could be restored!  Ruth continued to teach and instruct her nieces and nephews whenever she had the opportunity.  This practice continued as the great nieces and nephews arrived.  Precious memories include Ruth teaching us how to say numbers and simple phrases in German.
Ruth had the opportunity to travel to Europe during the summer of 1993.  One of the highlights of this trip was visiting the town and the house that her mother had lived in before immigrating to America.
Ruth loved going to church and even in the later years when she had trouble thinking clearly, she spent time each day “getting ready for church”.  She was a member of the Coal Springs Community Church where she loved to sing hymns and teach Sunday School.
Ruth, 99, passed away on Tuesday, June 5, 2018 at the Five Counties Nursing Home in Lemmon SD where she had lived for the past year.
Survivors include her brother Herman (Nina) Rosenau, Meadow, SD; sister, Lillian (Harold) Flatmoe, Meadow, SD; sister-in-law Rachel Rosenau, Rozet, WY; 16 nephews & nieces Les Lensegrav (Cindy), Meadow, SD, Twila Hoff (Denny), Hazen ND, Loren Lensegrav (Michelle), Shadehill, SD, Lee Lensegrav (Janet), Sioux Falls, SD, Layton Lensegrav (Debbie), Belle Fourche, SD, Jamey (Bill) Pownell, Gillette, WY, Jonathon Rosenau, Gillette, WY, Joseph Rosenau, Gillette, WY, Justin Rosenau, Gillette WY, Jim Rosenau, Meadow, SD, Julie (Kevin) Jefferies, Rapid City, SD, Bill (Missy) Rosenau, Bristol, SD, Bruce (Kim) Flatmoe, Burnsville, MN, Brian (Gloria) Flatmoe, Meadow, SD, Barbara (Pat) Clark, Meadow, SD and Rebecca (John) Paul, Faith, SD and numerous great nephews and great nieces.
Ruth was proceeded in death by her parents, Bill & Minnie; siblings, Walter, Ida, Albert, and Edwin; brother-in-law, Gordon Lensegrav; sister-in-law, Lucille Rosenau; nephew, Jeff Rosenau; and great nieces, Laci Hoff and Carrie Flatmoe.
A memorial has been established to Sunshine Bible Academy.