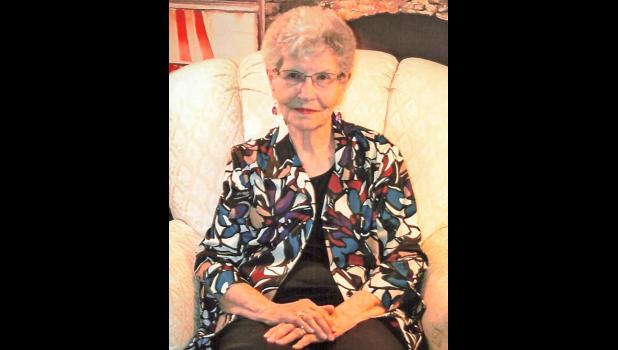 Rosalie Ellen (Fenner) Simons was born August 14, 1930, at the modest family home in Dalzell, SD. She was the fourth of five children born to Jake and Iris Fenner. She attended grade school through the eighth grade at the Dalzell School. Rosalie went on to graduate from Sturgis High School in May of 1948.
On October 31, 1948, she was united in marriage to Vern Simons.  Vern passed away on May 4, 2018, a few short months prior to their 70th wedding anniversary.
They made their home on the family ranch near Marcus, SD, for the next 14 years. Their first child, Loretta Sue, was born July 24, 1949, and passed away on July 25, 1949. On October 14, 1954, they were blessed with the arrival of Jeffrey Evan and then baby sister, Juanita Lue, on January 31, 1957. Jeff died in a tragic automobile accident on July 18, 1972.
In September of 1962, they bought the Red Owl Store at Red Owl, SD.  The family moved there and operated the store and Post Office until 1994. The couple moved to Sturgis and entered another venture; that of making a home away from home for their high school-aged grandchildren, plus a few others.
Rosalie became active in the Presbyterian Church and Ladies’ Circle.  In addition to other activities, they enjoyed card playing, dancing, and square dancing for many years.
Rosalie was a member of the Marcus Presbyterian Church and a participating nonmember of the Sturgis Presbyterian Church until moving to Rapid City in April of 2019.
Rosalie passed away at the Westhills Village Health Care Facility on Monday, June 22, 2020.
Rosalie is survived and will be missed greatly by her daughter, Juanita Delbridge; grandchildren, Kendra (Justin) Hanks and their children, Jae, Karie, and Jarren, Shane (Randi) Delbridge and their children, Connor, Dillon, and Adalynn, Chet (Emily) Delbridge and their children, Clara and Ty, and Kelsey (SMSgt. Will) Dominguez and their children, Cristian, Tucker, Aziah, and Joey; sister, Lila Mae (Sonny) Sorenson; several nieces, nephews, brothers and sisters-in-laws; and a host of extended family and friends.
She was preceded in death by her husband, Vern; daughter, Loretta; son, Jeff; son-in-law, Lyle Delbridge; her parents, Jake and Iris Fenner; sisters and brothers-in-law, Polly (Claus) Bruse and Harriet (Dick) Wittmayer; brother and sister-in-law, Clifford (Pat) Fenner; and several nieces, nephews, and brothers and sisters-in-law.
Visitation was held on Sunday, June 28, at Kinkade Funeral Chapel in Sturgis.
Private family services were held on Monday, June 29, 2020, followed by inurnment at Bear Butte Cemetery
Memorials have been established to the Marcus Presbyterian Church and the Red Owl Hall.
Condolences may be sent to the family at www.kinkadefunerals.com