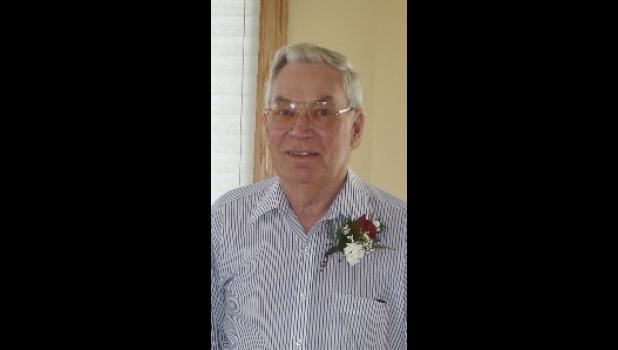 Robert Cleon Jensen was born on May 1, 1925 to Christian L. and Clara Larsen Jensen in Timber Lake, SD.  After his mother passed away when he was five he lived with several relatives. Growing up during the depression he herded sheep and did ranch work to help support the family.  His dad moved the family to Rapid City in 1940. He worked with his dad in the trucking business hauling freight between Mobridge and Rapid City. He drove from Faith to Rapid City along Highway 34. He talked about all the little towns between Sturgis and Faith on Highway 34. One of his favorite memories was of Mr. Hoyt who ran the Howes store. Mr. Hoyt wrote to him during his service in the Pacific. Bob worked in the shipyards in Portland, Oregon for a year before joining the Navy in 1943. He served in the Pacific and was in occupied Japan after the war.
He then returned to the trucking business. On one stop in Faith his good friend, Sonny Nelson, introduced him to Noreen Nelson. Noreen and Bob were married on June 7, 1947. After a short stint living in Rapid City they moved back to Faith. In 1952 he went to work for the South Dakota Highway Dept., working under his good friend and mentor, Harry Sandstrom. In 1967 he moved the family to Rapid City where he purchased the Robbinsdale Standard gas station.  In 1975 he went to work for the Federal Bureau of Reclamation, and he spent most of his career in Arizona. Moving back to the Black Hills in1991 the couple travelled to the Southwest for many years, they moved into Rapid City in 2000. Bob passed away on June 24, 2020.
He is survived by his wife of 73 years, Noreen; his children: Kevin [Mary] Jensen and Karen [Doug] Sorensen, Rapid City, his daughter Sheryl [Mark] Nielsen, Pierre, SD and son Daryl [Teri] of Laramie, WY, He has seven granddaughters and eleven great-grandchildren.
He lived a life well spent.
All memorials will be directed to the Bethel Lutheran Church in Faith, SD.
Behrens-Wilson Funeral Home is in care of the arrangements and condolences may be conveyed to the family through their website.