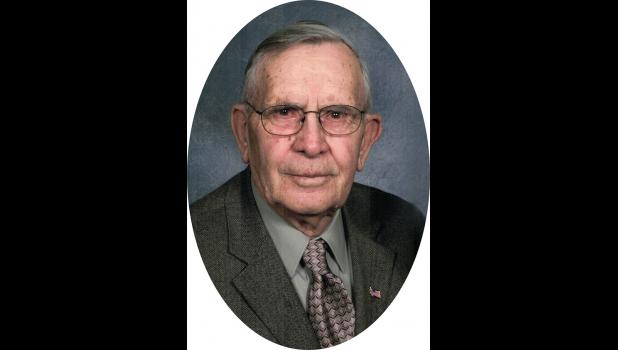 James W. “Jim” Anderson – loving father, mischievous grandfather, doting great-grandfather, and dedicated husband of seventy-five years to his wife Nora – passed away on Saturday, August 20, 2022. He filled ninety-eight years full to the brim with life.
Jim was born on Abraham Lincoln’s birthday, February 12, 1924 in Aberdeen, South Dakota to Oscar and Lillian Anderson. When he was two the family moved to rural Perkins County, renting land near Strool where Jim grew up with his two older brothers and two younger sisters. A decade later they bought a ranch and moved to the Meadow area.
For a short time Jim attended Lemmon High School, but left before graduating to work for his dad. In 1944 during World War II, he reported for his required physical examination, but received an agricultural exemption and remained on the ranch. Two years later he attended a local gathering and danced well enough to attract the attention of eighteen-year-old Nora Tidball. A short time later they followed the fad of many young couples at the time, traveling to Miles City, Montana where Jim and Nora married on October 5, 1946.
The couple worked various jobs and moved several times, but in 1959 Jim and Nora bought their own place. They ranched in eastern Perkins County for four decades, raising sheep, Gelbvieh cattle, one sweet girl, and four rambunctious boys. Friends and family noted Jim’s kindness and compassion; a gentle giant, his uncommon strength enabled him to stand up for himself and help others. As a man of faith, he supported Indian Creek Lutheran Church and taught his children to value honesty and integrity.
Jim loved ranch life and devoted intense effort to land stewardship. For forty-eight years he was a fixture on the Perkins County Soil Conservation District board of directors. He served fifteen years on the state board, thirty on the local weed and pest board, and promoted tree planting and conservation.
Beyond service to his community and willingness to lend one of his exceptionally large hands to any task or chore, Jim adored his grandchildren and great-grandchildren. He loved playing jokes, wiggling his ears, sharing cookies and dishes of vanilla ice cream, stealing noses, threatening knuckle sandwiches, and laughing with young people.
After retiring and moving into Lemmon in 1999, Jim could often be found snapping a regular cadence on his ever-present solitaire board and tending his enormous garden, planting and harvesting produce for family and friends. He and Nora attended Calvary Lutheran Church; were recognized by the Lemmon community as Boss Cowman Honorees in 2006 and Friends of the Perkins County Fair in 2020; and celebrated their diamond wedding anniversary in 2021.
Jim is survived by his wife Nora; children Peggy (Jerry) Martin, Dave (Danna) Anderson, Watson (Eileen) Anderson, Chuck (Koreen) Anderson, Dan (Sharon) Anderson; sixteen grandchildren; and thirty-two great-grandchildren.
Memorial services for Jim were held at 10:30 a.m. on Monday, September 5, 2022 at the Calvary Lutheran Church in Lemmon, SD with Pastor Charlotte Kvale officiating. A family service was held at 7:00 p.m. on Sunday evening, September 4th at the Calvary Lutheran Church in Lemmon.
Condolences may be sent through our website at www.evansonjensenfuneralhome.com.