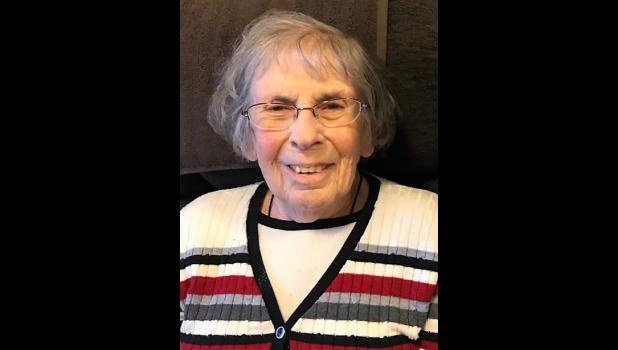 Esther Marie Wolford was born at home in Walbridge, Ohio on April 30, 1926 to Ray and Coloma (Stein) Sigler. She was the fifth of six children. As a young girl, she worked in her father’s Red & White Grocery Store. She graduated from Walbridge High School in 1944.
Esther was united in marriage to Charles Hill on May 6, 1948 in Walbridge, Ohio. To this union three children were born: Brenda, Diane, and Carl. Charles lost his life in a tragic fire accident in 1957 while building their home. Esther raised her three children alone until she married Gerald Wolford on July 31, 1966. Gerald had four children: Cheryl, Rick, Perry, and Connie. To their union Amy was born three years later so now they had hers, his, and ours. Esther and Gerald made their home and resided in Walbridge until retiring and moving to Wall, South Dakota in 1998.
Esther was a loving and caring wife, mother, grandma, sister, aunt, and friend. She never had a bad word to say about anyone. She loved to visit and never met a stranger. She loved her family and enjoyed all the family get-togethers. She was proud of all her children and grandchildren and their accomplishments.
Esther enjoyed writing letters, sending cards, baking, and traveling. Her travels have taken her to all 50 states, multiple countries, and four continents, as well as going on seven cruises. Baking was her passion, and she will be remembered the most for her cut out sugar cookies that she baked for all the holidays and more. She would make over 600 cookies for each special day and give most of them away. You felt privileged to be on her “cookie” list. She also enjoyed baking Amish friendship breads to deliver to people on that “list”. Soon after moving to Wall, Esther and Gerald received the Good Neighbor Award from the Catalyst Club. They quickly became part of the community. Esther would make her famous cookies and breads, and Gerald would drive her around to deliver them.
Church was always an especially important part of Esther’s life. In Ohio, she was a faithful member of Grace United Methodist Church and St. Paul’s United Methodist Church. After moving to Wall, she became a member of the Wall United Methodist Church. She always enjoyed being involved in church mission work.
Due to health issues, Esther and Gerald moved to Rapid City, South Dakota in April of 2018 where they lived until she gained her angel wings on June 30, 2020 at Monument Health Hospital surrounded by her family.
Survivors include her husband Gerald of 53 years of Rapid City; three daughters Brenda Carmichael of Wall, Diane (Norman) Geigle of Wall, and Amy (Terry) Beers of Howard, South Dakota; step-daughter Connie (Bret) Guthrie of Hickory, North Carolina; one son Carl (Jan) Hill of Rapid City; step-son Perry (Dana) Wolford of Hudson, Florida; 17 grandchildren: Janet, Angie, Marla, Sara, Joshua, Heidi, Whitney, Taylor, Ken, Ron, Rick, Holly, Dan, Penny, Deana, Jason, and Andrea; 41 great-grandchildren and 5 great-great-grandchildren; and a host of other relatives, as well as kids that thought of her as “Grandma”.
She was preceded in death by her first husband Charles Hill; step-daughter Cheryl Burke; step-son Rick Wolford; son-in-law Lyle Carmichael; grandson-in-law Tony Venjohn; her parents Ray and Coloma Sigler; and five siblings: Virginia Blair, June Hanely, Naomi Patton, Wesley Sigler, and Kenneth Sigler.
A memorial will be established. Cards and memorials may be sent to 1050 Fairmont Blvd. #29 Rapid City, SD 57701.
A come and go viewing was held from 2-6 p.m. on Sunday, July 5, at the Rush Funeral Chapel in Wall.
Funeral services were held at 1 p.m. on Monday, July 6, at the United Methodist Church in Wall. The funeral service will be livestreamed from this webpage if unable to attend in person.
Interment followed at the Wall Cemetery.
Arrangements are with Rush Funeral Home of Wall.