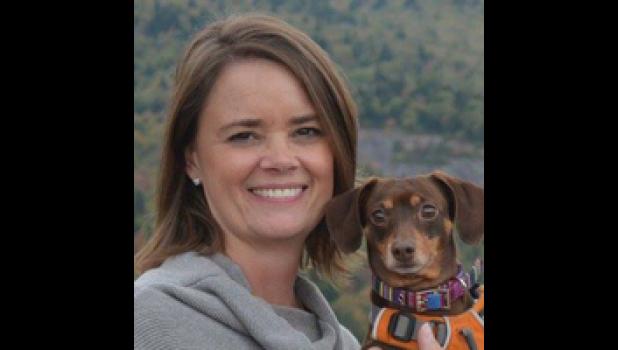 Amber Christine Beld Jensen, 46, Whispering Pines, North Carolina, previously from Bison, South Dakota, died tragically on September 6, 2022, in her home in North Carolina. Funeral services will be held at 10:30 a.m. on Saturday, September 17, 2022, in the school gymnasium in Bison, where she spent many hours in school. Pastor Brad Burkhalter will officiate. Friends and family members are encouraged to share their special memories of Amber.
Amber was born to Ken and Beth Beld, Bison, SD, in Hettinger, ND, on September 7, 1975. She left this life on September 6, a day prior to her 47th birthday. She is reunited with her dad in heaven, who passed away when she was only four.
She spent her school years at Bison School, graduating in the spring of 1994 as a Regent scholar.
During those school years, Amber was active in high school sports. She was a high school junior and part of the starting five when Bison’s girls’ basketball team made its first-ever appearance in the state tournament in Watertown, South Dakota, where they claimed the fourth-place trophy. She was part of the cheerleading squad that won first-place honors in several competitions, including the state contest. Her squad also qualified for and competed in national tournaments in Dallas, TX, and Minneapolis, MN. She was chosen to perform during the Aloha Bowl’s half-time show on Christmas Day in Hawaii in 1993 and was a charter member of South Dakota’s first state cheerleader squad. She was a distance runner in track and qualified several times for the South Dakota State Track Meet. She was also part of a drill team.
She was crowned Bison’s Snow Queen in 1993 and went on to compete for the state crown in Aberdeen, South Dakota.
Following graduation, she attended one year of college at SDSU in Brookings, SD, and then moved to Washington State, where she married David Jensen in a private ceremony on June 17, 1995. She received her associate degree in Interior, Residential, and Commercial Design from Clover Park Technical College in Tacoma, Washington.
Two children were added to their family in Washington: Jaleigh Bliss on December 1, 1995, and Colten David on April 8, 1999.
The young family moved to Fort Bragg, North Carolina, that same year. They eventually purchased their lovely home in Whispering Pines, where they continued to reside until Amber and David’s recent deaths.
They were members of Our Savior Lutheran Church in North Carolina.
Amber had her own successful business, Fine Design by Amber, where she kept more than busy (often having to turn clients away) designing kitchens and bathrooms and consulting on interior design. Her work was often featured in local magazines. She was recently nominated for the local “Best of the Pines” award. Amber entered her own newly-designed and functional kitchen in a nationwide contest in Taste of Home magazine, winning 2nd place and cash. Her family was featured in their January 2011 national publication.
Her favorite place on earth was their beach condo on Topsail Island, off the North Carolina coast. Often, she took her work there, enjoying long walks on the beach with her faithful little Dachshund, Greta Bean (1-1-2011 to 9-6-2022). She always referred to the beach as her “Happy Place” where she could spend a good amount of time “reflecting, reading and praying.” It was a place where she always found peace.
Amber was preceded in death by her father, Ken Beld, on February 6, 1980, her stepfather Roy Hulm on February 20, 2017, and her brother Kyle Hulm on August 14, 2018. Her husband, David, and Greta Bean died the same day that she did. Also preceding her death were her grandparents, Henry and Helen Beld and Eugene and Minerva Leitch, and one uncle.
Her untimely demise leaves many to mourn her loss who will miss and love her forever, including her children, Jaleigh Jensen (special friend Alex), Sandy, Utah and Colten Jensen (special friend Dina), Raleigh, NC; her mother, Beth Hulm, Bison SD; siblings, Jason (Wendi) Beld, Timnath, NC; Kendra (Pete) Theobald, Papillion, NE; Ryan (Raven) Beld, Spearfish, SD; Jared Beld, Aurora, CO; and Kirk Hulm, Box Elder, SD. Also, her mother and father-in-law, Mary Jean and Eldon Jensen, Lemmon, SD; and brothers-in-law Derek (Mitz) Jensen, Cedar Rapids, IA and Greg (Tonya) Jensen, Hettinger, ND; and sister-in-law Kari Jensen (Kyle) Thomas, Woodbury MN; along with numerous, nieces, nephews, aunts, uncles, cousins and many, many friends.
Until we meet again, sweet girl!
(lovingly written by her Mom)