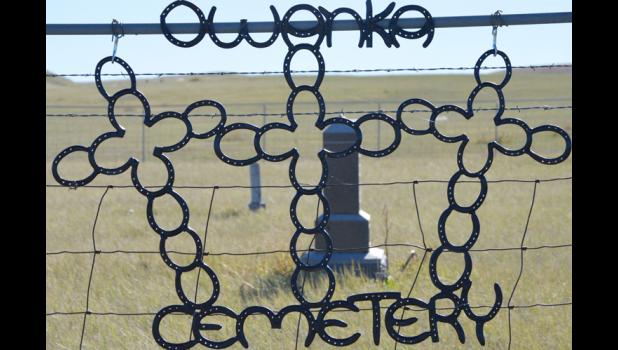 Tuesday, Oct. 11, marked the 65th anniversary of the Wicks-ville Workers, a community organization comprised of women from the Owanka, Wicksville and Lakeside areas that is dedicated to the furthering of all manner of humanitarian projects across the area.
According to Sherry Volmer, Owanka, who is a current member, the club was originally founded in 1951 as the Wicksville Workers Extension Club, which was similar to 4-H for adults. The original Wicksville Workers group was dedicated to bettering themselves as home economists and would attend regular classes in Rapid City to further their knowledge in all manner of housekeeping areas.
Not content with simply bettering themselves, though, the early Wicksville Workers also devoted their time and resources to raising money to help various causes, including food boxes for those in need in Rapid City and donations to the Cancer Fund, Mental Health and The Crippled Children, according to a 1965 entry in the local history tome known as The Red Book.
This spirit of dedication to the community continues in the 12 women who are the current Wicksville Workers. The club members, including Faye Volmer, Vicki Volmer, Linda Tifft, Catherine Tifft, Ann Harty, Judy Oldert, Darlene Wulf, Norma Williams, Sheila Stover, Connie Simon, Cheryl Wiebers and S. Volmer, have committed many years to contributing to the New Underwood and Rapid City areas. Club experience ranges from F. Volmer’s 51 years in the club to S. Volmer’s seven years.
Locally, the Wicksville Workers have assumed the care and upkeep of the Owanka Cemetery. They provided headstones for unmarked graves at the Owanka, Lakeside and New Underwood cemeteries, donated to the New Underwood food bank, donated money for postage to send care packages to United States troops, sponsored Owanka rural route emergency fire address numbers, made decorations for and helped with bingo events at the Good Samaritan Society, and sponsored CPR classes.
Enlarging their territory, the Wicksville Workers have also sewn blankets for the Rapid City Regional Hospital, including purple blankets for a shaken baby awareness campaign. They also sew incubator covers for the Neonatal Intensive Care Unit at Regional and have donated money to the women’s shelter.
Each year at Christmastime, the Wicksville Workers make food baskets to share with people in need of them. A famous and favorite Wicksville Workers tradition is the annual Christmas party, which is open to all of the Wicksville Workers, as well as to community members. It has become affectionately known to some in the neighborhood as The Bachelor Christmas Party, since the party welcomes many in the community who do not have family close by. This Christmas party, which is hosted by Catherine and Linda Tifft, is a potluck, and features special poetry from Lakeside poet, author and historian Edgar Simon, special music, and a gift exchange.
Perhaps the biggest undertaking of the Wicksville Workers in recent years was the overhaul of the Owanka cemetery completed in 2015. The cemetery, which is now on private land, had fallen into disrepair. According to Volmer, many of the headstones had fallen over, and the area had a general feeling of neglect.
Enlisting their husbands’ help, the Wicksville Workers used a skid-steer to right the fallen tombstones. They also mowed and made the area less accessible for cows and other animals who might wreak havoc in the cemetery. The Wicksville Workers have also provided plaques to adorn unmarked graves in their adopted cemeteries.
While many in the community have benefitted from the enterprise of the Wicksville Workers, S. Volmer said that the Wicksville Workers themselves are blessed by the camaraderie that comes from the work the club members do. Historically, as families made their way into South Dakota to settle the area, women overcame their loneliness from having left home, friends and family behind by forming community groups. The same still holds true today, as women who become involved in clubs like the Wicksville Workers find a place to belong and friends with whom to share life as they work to make the world a more hospitable place.