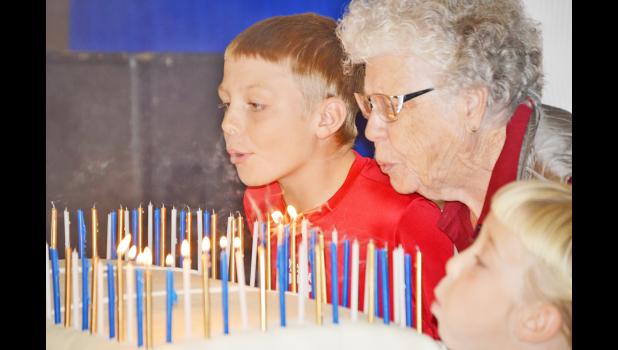 Over 300 members of the Golden West Telecommunications Cooperative met in Wall Saturday, Sept. 24, for the 64th annual business meeting and a celebration of the 100th anniversary of the co-op.
Golden West Telecommunications began in 1916 when area ranchers and farmers ran telephone wires along their fences to connect their telephones. The first Golden West line connected Interior to Quinn. Slowly, Golden West grew until it encompasses a wide area of western and into a portion of eastern South Dakota.
New Underwood area resident Shirley Printz, who has spent her life on the family ranch east of New Underwood, remembers that her parents had a telephone even before she was born in 1934. Her father was one of the enterprising ranchers who ran telephone wire sometimes along the fence and other times along telephone poles in order to have a telephone in their home.
In order to use their phone, Printz’s family had to call an operator in New Underwood who would then direct their call. Many phones in those days were on a party line, which meant that when anyone on the line received a call, the phones in each house along the line would ring. Different ring sequences denoted for whom the call was intended. In Printz’s home, the ring was three short rings, though Printz also remembers having one long and three short rings for their cue to answer.
Telephone etiquette was necessary in this situation. People kept their conversations short, Printz said. According to Printz, a person could be in the middle of a conversation and hear the click of someone else picking up the line. The people already in conversation would then offer to end their conversation so the newcomer could place his or her call. “Most of the time people would say, ‘No, I can call later,’ but sometimes they would say, ‘I really do need to place this call’,” Printz said.
Though most people who remember party lines avow that they did not listen to the conversations of other people on the party line, Printz remembers their party line differently. “We all did that,” she said.
Not everyone in the area had a telephone that early, though. Patsy (Quinn) Fenner, who was raised on a ranch east of New Underwood, said that her parents still did not have a telephone when she married her husband, Merlyn, in 1957.
The Fenners moved to Rapid City, where they had a telephone that could be used for local calls. When they moved back to New Underwood in 1962, they had a party line telephone, but Fenner said she had no time to listen in on her neighbors’ conversations. Her children, though, did have time to listen.
Fenner recalls one elderly neighbor who enjoyed long conversations with her friends. One time, this neighbor spent a great deal of time on the telephone explaining how to can rhubarb. “My naughty little kids were listening and giggling,” Fenner said.
Mary Kjerstad, who moved to her husband’s family ranch north of Quinn when the two were married in 1943, said that, at that time, her husband’s parents, Emil and Grena, had a privately maintained telephone, though Kjerstad and her husband, Konrad, did not.
Kjerstad’s sister, Marjorie Winkowitsch, who came to live with the family in 1946, remembers when Golden West representatives traveled the country, seeking to enroll people in the co-op. According to Winkowitsch, there were six people to a party line, and each person on the line had to pay a fee to join the co-op.
Telephone service took longer to reach some of the northern-most areas of the Golden West territory. Faith Miller, a co-op member from Mud Butte, remembers when she and her husband, Ronald, got their first telephone in 1962. According to Miller, her second oldest daughter, Sandra, was four at the time and learned her numbers by looking at the telephone.
Many of the neighbors maintained private lines and therefore had telephones before the Miller family did, Miller said. Some of Miller’s uncles, Lawrence Ingalls and Walter Ingalls, had a line connecting their houses. Their mother, Rosa Ingalls, and a cousin, Charlie and Elizabeth Weiss, were also on this early line.
When the Miller family initially got their phone installed, Miller remembers that she rarely used the phone. “You have to get used to having something like that in the house,” Miller said. Her husband, who worked in partnership with his brother, Shirley, utilized the telephone right away as a means of daily communication as the two planned out their day ahead. Now over 50 years later, Ronald still holds nearly daily communication with his two sons over the telephone as they plan their days together.
Miller remembers one male neighbor who enjoyed listening to everyone’s conversations on the party line. “We could hear him breathing, listening in,” Miller said.
During the Golden West annual meeting, incumbents Stewart Marty and Jeff Nielson beat out challengers to maintain their places as directors. Lee Briggs and Rodney Renner ran unopposed and were re-instated as directors.
Special music for the day was provided by Brandon Jones and his band, The Thirsty Fish. The New Underwood High School band, under the direction of Delayna Jensen, also were selected to play the Golden West Telecommunications theme song.