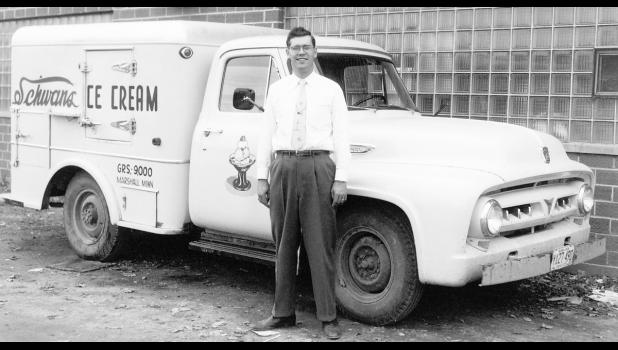 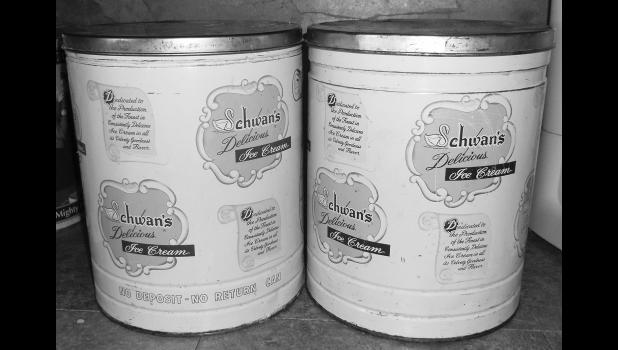 By:
By Clarice Roghair

Back in the late 1960’s, a new business came to Murdo. Some folks didn’t like it, saying the Minnesota-based frozen food factory would harm the grocery business in town. But for country folks like us, Schwan’s was a blessing. Otherwise, we just did not buy ice cream or other frozen products during the heat of summer because we couldn’t get it home without it melting.
Recently the big yellow refrigerated truck made its last stop in our yard. Seeing a story in the making, I set out to find some information.
On March 18, 1952, 23-year-old Marvin Schwan packed his beat-up 1946 Dodge panel van with 14 gallons of his family’s signature ice cream on dry ice and delivered it to rural families in western Minnesota. At the end of that historic trip all 14 gallons were sold and the Schwan’s home delivery business was born.
In 1953 Marvin bought his first refrigerated vehicle, a three-quarter ton Ford. An artist friend painted the truck a creamy yellow and added a logo. At this time Schwan was selling about 120 gallons of ice cream per day. He then hired his company’s first “career” route salesman.
In 1957 route trucks began carrying the company’s first non-dairy product—a juice concentrate under the Vita-Sun brand name.  Remember that? Our favorite flavor was orange.
In 1962 Marvin added fish to the home delivery offerings. By this time the company was expanding rapidly, operating in eight states by 1963. After ten years of business, the company had grown to more than $4.5 million in revenue and 83 trucks were     In 1966 the company began manufacturing ice cream drumsticks and sandwiches. It also ventured into frozen pizza when a Wisconsin salesman began selling frozen pizza from route trucks. Sandwiches were added to the menu with the purchase of Todd’s Foods and then more delights with acquiring “Tony’s Pizza” from Kansas.
On February 23, 1974 fire destroyed the ice cream plant, corporate headquarters and distribution center in Marshall, Minnesota. After briefly entertaining the idea of moving corporate headquarters to South Dakota, Marvin made the decision to re    build in Marshall.
On May 9, 1993, Marvin died at the age of 64. With one great idea and a lot of hard work and dedication, he had helped turn his tiny rural business into a multibillion dollar company. Many newspapers carried his obituary and some labeled him “The Emperor of Ice Cream.”
Since that time the company has officially partnered with Feeding America, the leading nonprofit organization working to end hunger in the United States.
Somewhere along the line, the company also bought out Edwards, Freschetta, Mrs. Smith’s, Pagoda and Red Baron brands.
Now the news you do not want to hear.  To say it nicely, “In 2019 Schwan’s became an affiliate of CJ foods with CJ CheilJedang gaining a majority stake in Schwan’s Company.” A search engine on the internet reveals the statement that the South Korean company has acquired an 80% majority stake in the Schwan Company for approximately $1.84 billion. I cannot even wrap my mind around that much money.
The story goes on to say, “But the company’s home delivery business, Schwan’s Home Service, remains an independent company that is 100 percent owned by the Schwan family.”
When I contacted Schwan’s for permission to write this story, my contact person said, “As you must know, closing the Murdo depot was not an easy decision for us to make as we have loved being a part of this community. This depot, unfortunately, was no longer viable for our business to operate.”
My first thought was, “Wow, with that much money they could afford to give us ice cream.”
Then I contacted Wayne Comp, who was a Schwan’s delivery person out of Murdo for 26 years. He told me at one time ten trucks ran out of the Murdo depot including two just to Valentine, Nebraska. I have seen trucks in Pierre, also, but forgot to ask Wayne how many trucks from Murdo served the Pierre area.
Comp also told me Schwan’s was a good company to work for. They paid well and pay was always exactly on time. When I asked him why there was so much trouble getting drivers and warehouse workers, he said simply, “Nobody wants to work.”
He also told me he could see change coming, so was not surprised when it did. He said 80 depots closed across the country. Those still open in South Dakota are Rapid City, Aberdeen, Sioux Falls and Yankton. He reminded me that Jones County has the lowest population of any county in the state. When he was driving for Schwan’s he would often have to drive 300 miles to make 100 stops. That’s not practical. Still, I cannot help but wonder how many people lost their jobs when the depots closed down.
Well, my gallon and one/half bucket of vanilla is getting low.  I can get online and order Schwan’s from the Sioux Falls warehouse and UPS will deliver it to my door, packed on dry ice and guaranteed to not melt. But next summer? We will see.