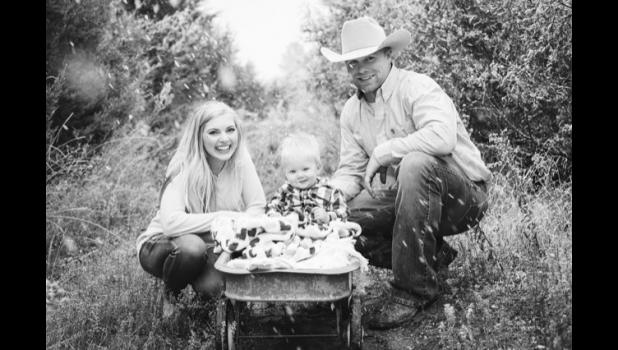 By:
By Kara New
On the morning of Dec. 17 Gabe Sandal accidentally shot himself in the upper thigh. He severed his femoral artery but would survive. Gabe was attempting to make sure the gun, a 9 millimeter pistol, was not loaded and that the chamber was empty. However, the gun was loaded and fired the full metal jacket bullet into his left thigh. This was the beginning of multiple things lining up just right so that Gabe would survive. A full metal jacket bullet is designed to not expand upon impact, so the damage was less severe.
Gabe was sitting in his pick-up truck at the time of the incident at his aunt and uncle’s, Rick and Wendy Johnson, property about 20 miles Northeast of Wall. He was alone with no phone available. So he began to drive amidst an obstacle course of grain bins, trucks and trailers to try and get back to the house for help. Gabe says that God must’ve taken the steering wheel to navigate him safely out of the yard. The next obstacle was a cedar tree that was about a foot across, it did not survive its encounter with the fast moving truck. Gabe was going in and out of consciousness from the loss of blood. However, the truck was moving fast across the pasture. Gabe’s Aunt Wendy happened to be looking out her window to see the truck speeding wildly across their pasture and called her son, Gabe’s cousin, Preston Johnson to investigate.
Gabe was still speeding across the ranch, he went across a water way hurting his ribs and making him alert enough to realize he was going the wrong way to the house. He turned the truck around and went back across the water way and back to the pasture. His cousin Preston found him out in the pasture and quickly took action. He applied a tourniquet to Gabe’s wound with his own belt. He also wrote the phone number of Gabe’s wife Afton on the side of the truck in blood so he knew the number to call her. Preston was then able to get Gabe back to Rick and Wendy's house. They moved Gabe to the back of a Jeep and Preston did another tourniquet out of a climbing rope that was in the back of the Jeep. This tourniquet was later praised by the doctor. Gabe’s Aunt Wendy called the ambulance.
Gabe’s family was keeping him awake and alert. They have said that his skin appeared ghostly white and he remembers temperature changes like being very hot. Preston’s wife Christy, who is an ICU nurse, arrived. She instructed them to hold Gabe’s legs up so that his blood would remain in his chest. Then the ambulance arrived from Wall they called the Life Flight Helicopter. The ambulance didn’t have blood to give him. The ambulance crew from Wall Put him on the stretcher and transferred him to the ambulance and left the ranch.
The Life Flight Helicopter took off but then had electrical problems, had to turn around, and return to their base. Life Flight did eventually meet up with the ambulance at the corner of Quinn Rd and Kelly Hill Rd. It had been about an hour and forty-five minutes from the time Gabe was injured to the time Life Flight arrived. Life Flight had blood and began an IV and flew him to Rapid Regional Hospital.
At the Hospital Gabe’s wife Afton, his father and a few other family members were allowed to see him before surgery. The surgery to repair his severed femoral artery lasted five hours. Gabe was released from the hospital on December 21st, just in time for Christmas and to see his son Boone turn one year old.
It was all God, says Gabe. From the bullet being a full metal jacket, to guiding the truck out of the yard, to his Aunt looking out the window at the moment he drove across the field, to Preston knowing how to make a proper tourniquet. God really had his eye on Gabe that day. He is a miracle survivor.