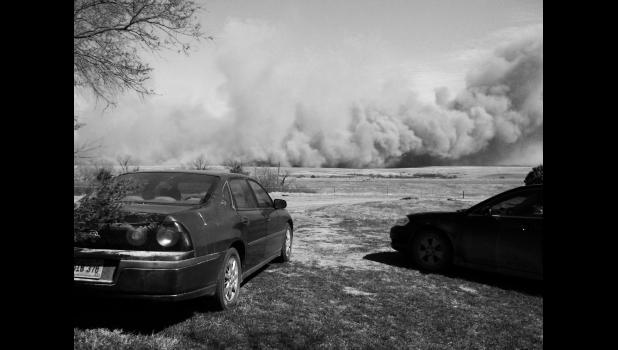 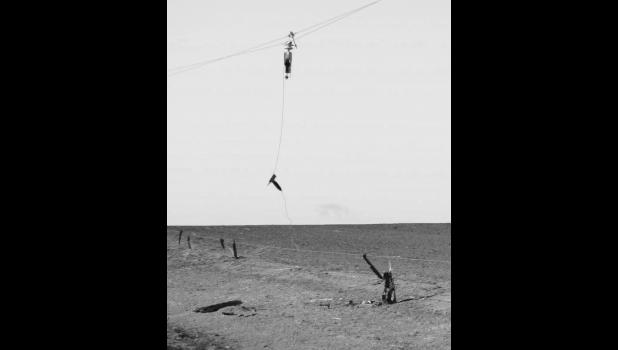 Trying to sleep in a strange bed while visions of the day just gone by is as good a time as any to throw together some parts of the effects of raging wind. So this news story is going to be a bit per    Monday, March 29, about 12:30, maybe closer to 1 p.m. arrived, and I decided it was time to find something to eat for lunch for Mel and me. Then the electricity went out. I quickly grabbed salad makings from the fridge and headed for the porch fridge to get some leftover chicken strips.
As I passed the head of the stairs I heard the phone ringing in the basement, so ran down there, thanking the Lord for one phone in the house that is not powered by electricity. Besides useless electric phones, Mel’s cell phone has died and mine does not ring loud enough for these old ears to hear.
Our oldest son, Marty, was on the “other end” of the call and he spoke words that could put a chill in the strongest heart. “There is a bad fire just north of you. Pack what you want to take and be ready to get out of there.”
How does one decide what goes, what stays? In a moment’s time how can you decide what you will miss the most of 55 years’ worth of collection?
Both cars were loaded with odds and ends, including the old dog. Mel left with Marty, knowing that while he could not fight fire any more, he can still drive.  I took pictures from the east side of the house, watching the flames lick up the grasses of the northeastern hills. Heavy, fast smoke ahead of a roaring wind is hard to imagine if you’ve never seen it.
I got in the blue car and tried to call a couple people, hoping to find a driver for the black car, but no one answered. Then I called daughter Laurel in Iowa to ask her to pray.
The erratic wind veered to the south a bit and smoke began to billow over the shelterbelt to the north of our buildings.
A phone call interrupted my conversation with Laurel and I heard the order, “Get out of there. Get out now.”
The stuff I really wanted to save, my computers and back-up drive were in the black car. The dog and I were in Blue.
It is a very strange feeling when you think your house is going up in smoke. It didn’t. How does one ever thank the firemen and other friends and neighbors who risked their lives in the battle against the wind-driven fire?
And at this writing, on Tuesday morning, the wind is howling again. Now it is rushing across no-till fields where stubble was supposed to hold down the dirt. But the stubble is gone and black ash mixes with the dirt, fouling the air, piling up in ditches and old machinery reminiscent of the Dirty Thirties.
I heard a rural electric pole blew down in the wind, throwing sparks and starting the fire a quarter mile north and several miles west of our house. That could possibly be, but since I cannot even remember who told me that, don’t believe it until you see it as fact. I was also told the “Partners Lodge” had burned down. It didn’t.
Another thing I was told, and I hope is still true is that no residences were lost. The vacant house on the place where the Judd Family was living in 1952 is gone. A neighbor estimates he lost about 400 acres of field and pasture land.  The fire burned within a quarter of a mile of another neighbor’s home. The fire also burned to the southwest corner of the pipe yard, a part of the Keystone project.
After spending the night in Murdo, on our drive home, we saw the numerous miles of blackened land. Groups of faithful firemen were still on the job, dousing flareups before they could become another major burn.
I cannot begin to collect all the stories of courage, love, prayers, and encouragement that were stirred up by the March 29, 2021 Jones County prairie fire.
This story would not have been written if God had let it happen at night. Or if road man Colin Strait, from his road grader, had not alerted Marty and others about the fire. Colin did his best to control flames with his outfit, but got hung up in a ditch.
Anyway, it would not have been written by me.