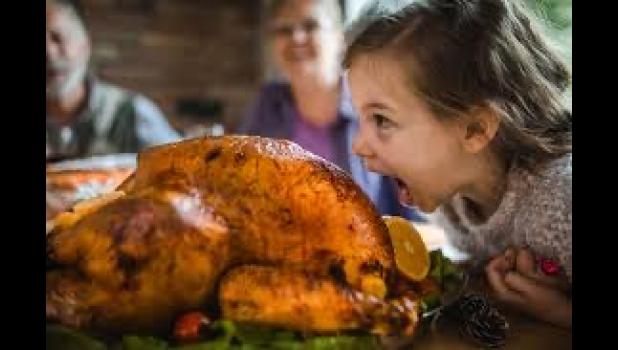 Thanksgiving: Spending Time With Family - Just One Reason to be Thankful

Given my love for family reminiscing sessions and days specifically designated to cooking, it’s pretty natural that Thanksgiving has become my favorite holiday as an adult. That being said, holidays have always been at least a  little notorious for somehow sneaking up on people, forcing a bit of scrambling to get a plan figured out while still successfully making it to the grocery store before it closes.

Catching some kind of terrible bug while trick or treating with the kids, the Monday after Halloween I stayed home from work assuming a day of rest and some cold medicine would probably have me back to normal in a couple days max. Progressively feeling worse each day instead of better, I ended up being home the entire week.

Starting to miss being at work instead of sitting at home, the following Monday I decided to stock up on medicine, grabbed a blanket, and headed to town. Feeling decent some days and terrible others, this week consisted of working half days, whole days, calling in, and clocking out for naps, but by Friday I was starting to feel a little better. Feeling better as the weekend went on, I was back to normal by Monday.  After being at work for a couple of hours, unbearable stomach pain hit me out of nowhere so I headed to the clinic. They decided my appendix was the issue, sent me to Rapid City, and told me I’d need a week's recovery after surgery. So long short,  I was back at work for 2 ½ hours, then stuck at home another week.

Now I promise I didn’t write this article just to whine about work absences and ailments, but the month of November has been pretty terrible for me so far. It wasn't until Saturday afternoon that I realized it was almost the week of Thanksgiving. Wanting to help out a little and get something written for the paper,  I started reading articles online about the history and significance of Thanksgiving. Many of the articles listing different things that we all should be thankful for, I had a little better attitude by the end of the weekend, and I was actually pretty excited for Thanksgiving.

Thanksgiving started out as primarily a harvest-related festival, the first celebration taking place in 1621.The Pilgrims, having had a successful harvest after a very tough year, felt the need for celebration. Inviting the local Native American tribe of Wampanoag, they feasted on local delicacies such as squash, pumpkins, corn, beans, goose, lobster, cod and deer, the celebration lasting 3 days.

Though George Washington made the first National Thanksgiving Proclamation on October 3, 1789, It was actually Franklin D. Roosevelt who finally set the exact date of Thanksgiving. It was decided in 1939-1941 that Thanksgiving would be a national holiday on the fourth Thursday of November each year. Every year since the 1940s, the President presented with a turkey or two selected by the National Turkey Federation, 'pardons' one turkey (at least) from being a part of the Presidential Thanksgiving dinner at the White House.

Today, Thanksgiving is a time for families to come together for a day to count their blessings, but don't forget that without the Immigrants initial celebration with their Native American guests, this day wouldn't exist.

While much of Thanksgiving is dedicated to spending time with loved ones, some things are a little less sentimental. As soon as the buffet Thanksgiving is available, it's hard to care about much else. As a kid, after I finished eating it was time to break the wishbone. As an adult, my only priority after I've eaten to the point of discomfort is finding an empty couch to nap on when the annual food coma decides to set in.Since I can’t name a single person who would turn down a Thanksgiving invitation, I just assume that there simply aren’t any. With each family having their own unique traditions, beloved secret recipes, and their own way of doing things in general, no two gatherings are ever the same. Known as one of the most famous holiday traditions in America, watching the Macy’s Day Parade might be the long-time tradition of one family, while another might schedule the entire day around Thanksgiving’s football selection. Whether it's picking out a Christmas tree, helping the kids set the table, or even just visiting with family, traditions are what many holiday memories are made from.

Given everything that’s happening in the world causing the instability, fear, and uncertainty that many of us feel, there’s no better time than now to stop and give thanks for all that is good. Thanksgiving is a holiday that reminds me that there’s more to be thankful for than sad about. Remember to keep practicing positive thinking, looking at the glass as half-full rather than half-empty. It’s a holiday that’s perfect for gathering with loved ones and expressing gratitude for our blessings. It's a day to remind people to appreciate all that’s joyful in life, including beloved friends and family along with countless other things. Thanksgiving focuses on all things positive, free of materialistic motivations and centered around quality time with others.

Celebrate this holiday season by practicing gratitude whenever the chance is presented. Things that seem insignificant to you could make someone else’s day. Call a friend you haven't spoken to in a while and check up on them. Surprise your significant other with their favorite meal waiting for them when they get home from work. Gather up some clothes you haven't worn in ages and give them to someone who might appreciate having some “new” clothing. Deliver Christmas goody bags to the elderly people in your community. The possibilities are endless, and the outcomes are encouraging.

It’s easy for us to look around the Thanksgiving dinner table and say that we are thankful. Some surrounded by family, friends, and food, feeling that warm, fuzzy feeling that comes with a holiday gathering; we’re thankful. So this year, remind yourself what thanksgiving is really about, and how to really be thankful.