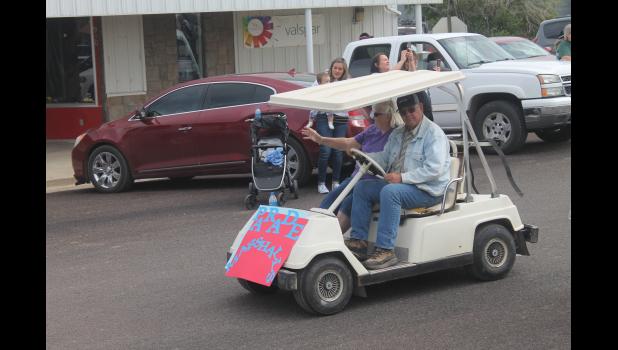 By:
By Jenny Leibel

School spirit was in full-throttle Monday morning as teachers and classmates took a trip dressing with their wacky socks as part of their annual Homecoming Dress Up Days. Tuesdays was Whoville where it was Crazy Hair Day. Cat in the Hat day was on  Wednesday as participants were urged to wear their craziest hats. Thursday became a day of wearing your College shirt as it will be the Places you will go theme. Friday topped off the week’s Dress Up Days with Purple-and-Gold day to show off our Kougar Pride.

Coronation was held Monday, September 20th, where it started with Farynn Knutson speaking about the students. After Farynn finished speaking it was the cheerleaders turn to cheer to the school song. During the coronation, students and the community listened to the head coaches speak about their athletes. To speak first was Cross Country runner Farynn Knutson to speak for Jesse Taylor as he wasn’t able to attend, speaking about the awesome runners and their journey. After Cross Country was Asst. cheer coach John Handcock where he talked about his dream team of cheerleaders. Next was Volleyball coach Barry Hutchinson and he talked about the girls first couple of games and how great the girls were. After Volleyball was Football coach Chad Eisenbraun and he explained how the boys had one bad quarter the first game but after that they have played their hearts out.

Also on Tuesday was the Burning of the K. The Cheerleaders worked really hard on wrapping the K with paper and tape so it would burn a long time. While the K was burning the cheerleaders did chants to get the students hyped up.

A pep rally was held early Friday morning. Students and Staff played a variety of fun mini-games before returning to school to work on their parade floats.

The homecoming match-up between the Kadoka Kougars and Philip Scotties resulted in a win for the Kougars. The High School Football team worked hard in playing the Scotties with an ending score of 40-18. The cheerleaders did amazing cheering as they were throwing stunts.

Really proud of our guys and the resiliency they showed in this game.  It was a hard-fought battle the entire game and our boys showed a lot of discipline. They played very well and won the game together.