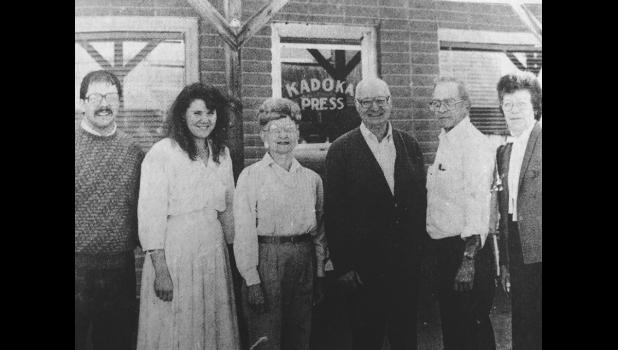 By:
By Desmond Bad Wound
Longtime Kadoka Press owner, Larry Parkinson, passed away February 9, 2021. Larry & Alvina held ownership of the Press for nearly thirty years and were involved in the newspaper business for forty years. His dedication to the newspaper business, especially we at Kadoka Press, is something we can’t thank him enough for.
The following information was pulled from Larry’s last column entry, dated April 27, 1989.
Larry began his journey into the journalism world at his local newspaper, the Kadoka Press, in 1939. He was 13 years old. Harry Dawson, then-editor of the Kadoka Press, hired the teenager. Parkinson worked after school, weekends and school-nights for Mr. Dawson.
Dawson would leave and soon R.F. Lewis would come help him. Lewis decided to move on from the Kadoka Press a few short years later. Parkinson, ready-or-not, had to put out the paper. Then-owner Mr. Zimmer told Parkinson that if he could put out the paper he would raise his pay from $1.25 a week to $10. Ten dollars a week for 14 weeks in 1939 would make for a great payoff he thought.
Larry was able to get help from his brother Jerry, “It certainly wasn’t much of a newspaper, but it kept the newspaper legal for the owner, Mr. Zimmer.”
A great responsibility was pushed onto his shoulders, but Larry stood up to the challenge. Never missing a deadline, Larry was due for a large check for a large check from Mr. Zimmer.
After proving his dedication to the Kadoka Press, it hurt him when Mr. Zimmer did not pay him a cent. He would leave soon thereafter but he took his admiration for the business with him.
Soon after, Parkinson moved to Oregon. During his stay in Oregon, he found himself in the same position as he did back in Kadoka. He would begin using his free time after high-school to help out the local newspaper, News-Times. He then went into the U.S. Navy in 1946. After being discharged, Larry had found out that his father had already enrolled him at South Dakota State College in Brookings as a first-year printing student. He really couldn’t get himself out of the business if he tried!
Parkinson then left college with his wife Alvina, packing their belongings into a 1939 Chevrolet and headed west. They soon found themselves working for the McLaughlin Messenger. It didn’t take the duo long before they were managing it themselves. The previous owner, E.Y. Berry was elected to the United States congress in 1950 and handed the reigns to Larry & Alvina.
Nine years later, they decided to purchase the Press from Orville and Ella Rock and moved back to Kadoka.
Twenty-nine years went by fast and the Parkinson’s soon sold the Press to Ravellette Publications, Inc. May 1, 1989. Larry & Alvina assisted the new owners, Les, Belle, Don & Tami Ravellette for the entire month of May. Throughout Larry’s life, he would release a column of his own, on top of managing the business, titled “Ramblings by L.G.P.”
The column served as a place for community news. He would write about when the Kadoka Kougars were playing again, upcoming weather notifications, events happening around the area, city ordinance reminders and much more.
He wasn’t the silent type, letting everyone know the honest truth about how he felt. One such reminder, “Everyone complains about the cost of everything going up these days and rightfully they should. However, this writer discovered something last Wednesday that hasn’t gone up since he purchased the last one some four years ago! Bet you just can’t wait to read the next sentence and find out what it was? Well, it’s the cost of a South Dakota driver’s license! It still costs $6.00—the same as it did four years ago! Really, however, I probably shouldn’t write anything about this! Some state legislator might hear about it and—and, wham— the next Legislative session well find a bill introduced to raise the cost of a state’s driver’s license! Oh well, at least I’m set for the next four years! Be assured, however, it won’t be a tax raise! It will just be a fee raise!”
It also served as a place where you could laugh. He would share jokes in his columns, like “Overheard this week, ‘They say you can’t take it with you, and I’m sure that’s true! But my problem is to make it last until I’m ready to go!”
Larry’s dedication to the newspaper business will not go unnoticed. Whether it was the McLaughlin Messenger or the Kadoka Press, he and his wife shared a deep admiration for the citizens, advertisers and subscribers.