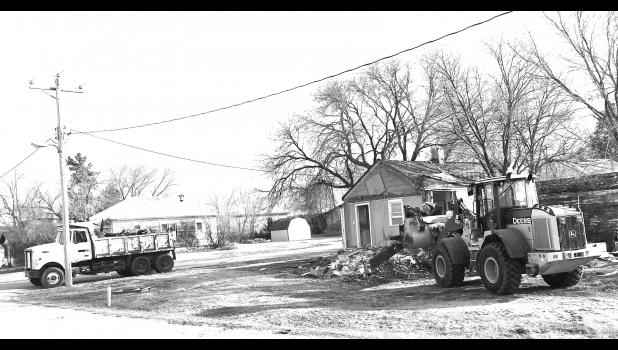 By:
by Elizabeth “Liz” Meighen
The Board of the Jackson County Commissioners met on Nov. 9 at the Jackson County Courthouse. Commissioners attending the meeting included Gerard Magelky, Brent Prang, Ruby Sanftner and Tom Zickrick. Commissioner Jeff Page did not attend the morning session of the meeting but appeared for the afternoon session commencing at 1 p.m.
In the first matter of business, the Commissioners approved the minutes of meetings conducted in October. Vicki Wilson, auditor for Jackson county, informed the Board that the Black Hills Association of County Commissioner plan to conduct their Dec. 11 meeting via Zoom, a videoconferencing application.
Deputy Jon Beck, Jackson County Sheriff Department (JCSD), provided a departmental report to the Board. Beck requested authorization to purchase a second ballistic vest as the department currently owns only one vest. Additionally, Beck requested and received authorization to purchase ammunition needed in the line of duty and for JCSD training purposes
Beck, in the capacity of the county emergency manager, reported filing a grant application with the Department of Homeland Security (DHS) for reimbursement of 16 mobile and portable radios for Jackson County volunteer fire departments. He reported the DHS awarded $50,056.80 in grant monies. The cost of the radios, less the funding received, will be passed on to each of the volunteer fire fighting agencies proportionally to the number and type of radios at each facility. In September, the Board moved to declare a departmental vehicle, a 2016 Dodge Ram, as surplus and advertise its sale on the online auction site Purple Wave. Wilson informed the Board that the county completed the necessary documentation to present the 2016 Dodge on the website. Further discussion began regarding JCSD surplus property which includes emergency vehicle lights and office furnishings. The Board authorized disposal of the items deemed surplus or inoperable. In October, Beck informed the Board that he continued to search for grants to assist law enforcement agencies with the purchase of law enforcement in-car video camera systems in both JCHD departmental vehicles. In an update, Beck informed the Board that he applied for a grant to assist with the purchase in the amount of $20,000.
Cheyenne Herber, director of equalization, reported a resolution requires conformity with South Dakota Codified Law. The Board rescinded a measure never implemented by the county that placed a “discretionary formula on residential property” and opted to implement a revised resolution for new commercial structures. Herber further reported completion of assessments and property transfers for taxation purposes. In other matters of assessment, Herber reported the adjustment for river flooding on agricultural property will be “completed for assessment notices in 2021.”
Wilson provided the monthly financial and highway fund analysis reports to the Board in addition to the auditor’s account with the treasurer and total county funds including trust and agency funds as of Oct. 31. She submitted bills for review and approval except for recurring statements for medical or mental health bills that are eligible for payment through another agency. Wilson reported a payment in the amount of $10,832 from the Federal Emergency Management Agency (FEMA) and estimated a reimbursement of $154,000 from the Coronavirus Relief Fund with upwards of $220,000 allocated to the county through the end of the fiscal year. Wilson informed the Board that the date of the regularly scheduled meeting is Dec. 14 but she prefers to conduct the meeting on Dec. 7 so “I can close the year.” Additionally, Wilson requested a special meeting be conducted on Dec. 28 for the Board to conduct year end business by paying bills for the 2020 fiscal year and transferring funds within the budget. The Board also discussed the holiday schedule for the county office for Thanksgiving, Christmas and New Year’s Day.
The Board recessed for lunch and reconvened with Jeff Page in attendance. Denny Lottman, superintendent for the Jackson County Highway Department (JCHD), provided a report to the Board and great discussion ensued regarding replacement of bridges constructed on county roadways. In October, the Board received two bids for bridge replacement for bridge 36-273-191, known as the Uhlir bridge on 254th Street (CS 79). The Board discussed options including repairs to the existing bridge. Ultimately, the Board rejected both bids, with the lowest replacement at a cost of $1,202,500, and decided not to utilize monies from the South Dakota Department of Transportation Bridge Improvement Grant (BIG) necessitating a cost share of $480,000 from the county. The original estimate cost share from the county was $240,000 and Prang objected to the increase in costs stating, “they told us that is what we would pay.” Lottman attributed a great deal of spending “so much in preliminary money” to hire engineers to prepare plans or even implement a project. After inspecting the bridge, the Board decided not to replace the bridge but to make repairs and not utilize any BIG monies for the project. Additionally, the Board rejected a work order submitted by engineering firm Kadrmas, Lee and Jackson (KLJ) at a cost of $9,500 to prepare a plan, profile and construction information for a proposed low water crossing at the site of the Uhlir bridge. Lottman reported continued discussion with the city of Kadoka regarding a city-owned lot adjacent to a building site proposed for a new JCHD facility.
The Board plans to meet on Dec. 7 for the regular, monthly meeting at 9 a.m. at the Jackson County Courthouse. Plans also include a special meeting on Dec. 28 at 1 p.m.