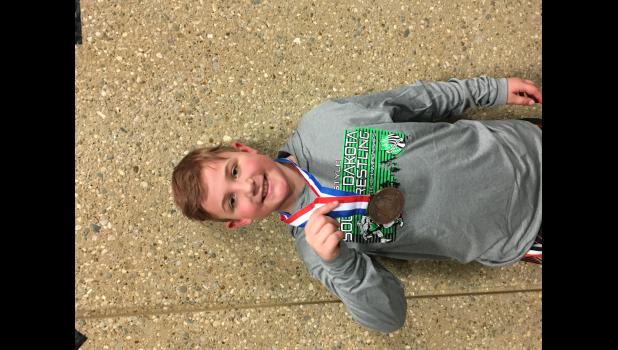 Faith Area AAU wrestling team member Jerin Capp and mom Jessica Klein traveled to Brookings, SD, on Friday, March 15, 2019, for the State AAU Wrestling Tournament.
Friday was spent checking in and recording weights for each of the contestants participating over the weekend.
Jerin was one of 16 contestants who checked in and competed in the Midgets 113lb. division over the weekend.
Saturday, March 16th,  Jerin  wrestled in 5 separate matches. losing two matches and winning 3, which moved him on to the championship Sunday, March 17th.
Sunday started with a Parade of Champions, where each team walked into the gym as a group. Jerin proudly represented his team when announced.
Jerin fell to his opponent during the match on Sunday securing his 6th place win overall in the state standings.
Jerin’s mom Jessica said, “I am very proud of Jerin competing at the state level, and how hard he has worked this year to improve his skills and learn new techniques.”
Your hometown and team are proud of your accomplishments this season Jerin!