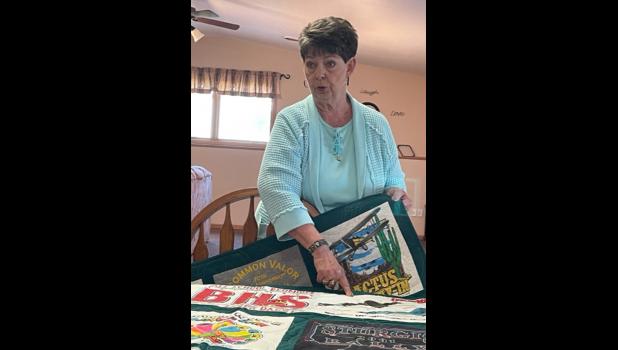 Bert Lewton was a guest presenter when Town and Country CFEL met on May 26.
She is an accomplished seamstress who started sewing on an old treadle sewing machine that her parents bought her at auction when she was just nine years old. She has fitted and sewn pageant clothes for a rodeo queen, made prom formals and wedding dresses and even a fabric tractor seat!
Never did she think that she would ever want to become a quilter but her other sewing projects had left her with quite a lot of fabric pieces. Quilting would be a good way to use them up and it became her hobby only ten years ago. In that time she has created many beautiful quilts and she brought several of them to show to the club members.
Included in her presentation was a quilt that she made for her husband Dennis from t-shirts that tell a story of his life interests. She had another with a bull frog theme. Their winter home in Arizona uses frogs in the décor. Among others that she shared were a kitten-themed and a floral –themed quilts. Her very favorite is a colorful cactus-themed quilt that she designed using scraps of fabric. She also showed several pieced table runners.
Bert’s hobby is mostly for her own enjoyment. Some of her quilts have become gifts, some were donated to various fundraising efforts but most are stored in pillowcases in her home.
During a short business meeting, following the quilt show, the club nominated longtime member Teddi Carlson for the coveted Spirit of CFEL award. That nomination has been sent to the state CFEL chairwoman. A winner will be announced at the annual statewide CFEL convention in Watertown in September.
Also being recognized during that same convention will be Town and Country members Joyce Waddell and Beth Hulm, both with 50 years of membership in the organization.
The June meeting of this club will be their annual picnic in Lions Park on June 23, beginning at 5:00 p.m.