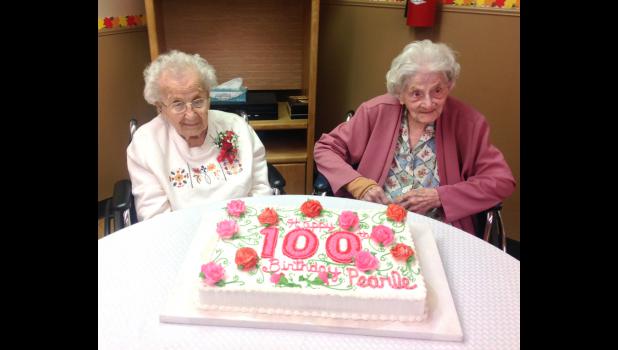 Both attended country school in Strool although Phyllis completed all eight elementary grades there while Pearle transferred when a new school was built at nearby Maltby. Phyllis and her sister Iva walked three and a half miles through fields and the prairie to attend school; Pearle arrived on horseback with her sister Gladys.

Both young women attended Northern State Teacher’s College and received one-year teaching certificates. Pearle used hers to teach in rural schools from 1936-1942. Phyllis taught for two years and then returned to Northern Teacher’s College where she earned her State Teacher’s certificate. After that she taught a few more years in Perkins County school before Bible school at Chicago Evangelistic Institute for four years where she earned a Bachelor of Arts Degree in education.

During that time, Pearle married George Jesfjeld on July 24, 1942. The Jesfjelds made their home on the Jesfjeld ranch, located on the South Grand River between Strool and Lodgepole. They raised two children there. Janet was born in 1943 and Clyde in 1945.

In March 1949, Phyllis, who never married, sailed to Germany to do missionary work with the European Evangelistic Crusade. She returned to South Dakota in 1954 but left again to teach in Anderson, Indiana, at a Christian day school. She also spent a year each in Los Angeles and New York City.

Upon her return to her roots, Phyllis taught one more year of school in Perkins County before becoming a caregiver for her father. Following his death in 1960, she returned to the classroom, retiring in 1979.

For the next 16 years she farmed and raised calves. She retired from that second career at the age of 80.

While Phyllis worked and traveled, Pearle was an active farm wife, mother and a willing volunteer. She was a member of the Sidney Sunshine Extension Club for more than 50 years and served on the Perkins County Extension board for 30 years, many as their secretary. She was elected to the local schoolboard in the 1940s and 50s. Pearle was also active in Perkins County Farm Bureau and the Perkins County Republican party. She is a lifelong member of American Lutheran Church (now Evangelical Lutheran Church of America). She enjoyed writing letters and kept a diary for over 40 years. She is well-known for her crocheted items and is still an avid reader.