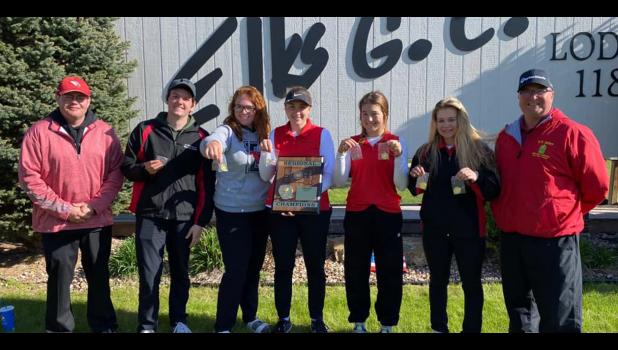 Kahler places 1st
At the start of the season, Allison Kahler and Bison set out on a mission to reclaim the Region 6B title and make an impact at the Class B State Tournament.
The Cardinals checked off the first part of that mission, capturing their second straight team title and Kahler’s second straight individual title Monday at Hart Ranch Golf Course.
“It’s excellent to get another repeat,” Bison head coach Jeffrey Johnson said. “It’s awesome for the girls and awesome for the team. I’m proud of all of them.”
Bison finished the tournament with an 88-over-par 304, 39 strokes better than second-place White River.
Kahler topped the field, shooting an 11-over-par 83, four strokes ahead of Rapid City Christian’s Hayden Thorton.
Everybody’s score went down a few strokes because of the conditions at the course, but Kahler left proud of what the Cardinals accomplished.
“The course was in really good shape,” Kahler said. “I’m really thankful that it didn’t rain on us today, but I was able to and our team was able to hold through the cold and the wind.” The Top 15 scorers and the two best teams at the region tournament qualified for State on June 6-7 back at Hart Ranch. All four Bison participants, No. 9 Greta Anderson (107), No. 10 Mary Carmichael (114) and No. 19 Ella Anderson (114) played well enough to qualify as individuals.
Johnson and Kahler both said playing the course at the regional tournament, should give Bison a leg up against competition from across the state.
“We can prepare for it,” Johnson said. “It's a good experience for them and they can get relaxed for it. It should be all in our favor.”
Now Johnson hopes the hard work Kahler put in all season translates to the state tournament.
“She’s the leader for sure on this team,” Johnson said. “She’s a workhorse and has prepared herself to continue being No. 1 in the region and hopefully be No. 1 at State, or at least give herself a chance to be No. 1.”
Team Standings
1. Bison, 304
2. White River, 343
3. Philip, 371
4. Harding County, 387
5. Bennett County, 442
6. Wall, 453
State Qualifiers
1. Allison Kahler, Bison (83)
2. Hayden Thorton, Christian (87)
3. Kelsey Morrison, White River (93)
4. Karlie Cameran, White River (96)
T5. Kamri Kittleson, Jones County (101)
T5. Holliday Thorton, Christian (101)
7. Taylor O'Connell, Philip (104)
8. Kelsi Clements, Newell (106)
9. Greta Anderson, Bison (107)
T10. Mary Carmichael, Bison (114)
T10. Ella Anderson, Bison (114)
12. Megan Begeman, Bennett Co. (123)
13. Alexis McCann, Harding Co. (118)
14. Megan Jackson, Newell (120)
15. Grace Jager, Bennett Co. (123)
Reprinted from the Rapid City Journal